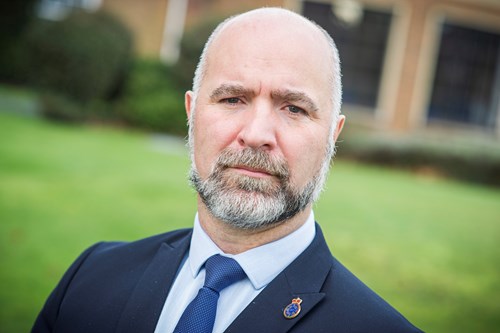 The Government’s pledge of a new Police Covenant to enhance support and protection for police officers must not become a broken Parliamentary promise, Wiltshire Police Federation has said.

Mark Andrews, Federation Chairman, praised Home Secretary Priti Patel for announcing that she would be enshrining a police covenant in law, creating a statutory duty on the Government to do more to support the police.

But he warned that the announcement must not be more warm words about policing from politicians – action must follow.

The initial focus of the covenant will be on physical protection, health and wellbeing, as well as support for families and its introduction will place a requirement on the Home Secretary to report annually to Parliament on progress with the covenant.

Mark said: “As with everything though the devil will be in the detail. I hope this will make a difference to police officers and their families but I have real concerns what ends up in Parliament will be less than expected and at the end we will have some pretty words with no real changes.

“Fingers crossed this is merely cynicism from someone who has heard a lot of promises over the years only to have these diluted or totally broken.”

Speaking at the Police Superintendents’ Association Conference on Tuesday, Home Secretary Priti Patel emphasised her support for policing as she launched the covenant.

She said: “The police and the families that stand behind them deserve special recognition.

“Their bravery and sacrifices are what keep us and our loved ones safe.

“I will put the police covenant in law to ensure they will always have the support of the nation.”

Ms Patel said she had a “determination to ensure the punishment for those who kill an officer as they do their duty truly fits the crime.”

Ms Patel added: “I stand with you, against any vile thug who threatens the thin blue line. If they come for our police, I will not hesitate to come for them. And I will do everything in my power to ensure justice is served.”

Mark added: “I would personally like to thank the National Police Federation of England and Wales Chair, John Apter, for his work in moving the Police Covenant forward.  He and his team have been tireless in promoting this and the need to value the efforts of those who put themselves in harm’s way.

“I would also like to thank the Home Secretary as I continue to be impressed by her attitude towards policing and the fact she seems to really care.”

Mr Apter said: “This Covenant will mean much more than words to serving or former police officers. It recognises the unique position they hold in society and the fact they very often put their lives on the line.

“The benefits of this Police Covenant will be welcomed by the entire policing family. We would therefore like to thank the Home Secretary for her enthusiastic support and for turning PFEW’s campaign for a Covenant into a reality.”

The Covenant applies to serving and former police personnel. It creates a statutory duty for forces to support police officers.