Rank and file officers have been honoured alongside members of the Special Constabulary and police staff in the 2021 Queen’s New Year Honours list.

Welcoming the announcement, National Chair of the Police Federation of England and Wales John Apter, said: “Police officers do not do what they do for thanks or praise, but to be recognised with an honour from Her Majesty the Queen is the ultimate recognition and I congratulate all who have made this extraordinary achievement.

“2020 has been an exceptionally difficult year for us all. My colleagues have stepped up and done their absolute best in the most challenging of circumstances. There has been little to celebrate this year which is why police officers and police staff being recognised in this way is so welcome.”

Detective Inspector Michelle Stoten of Essex Police, and former colleague Detective Chief Inspector Martin Pasmore were honoured with the Queens Police Medal (QPM) after playing important roles during the investigation into the death of the 39 Vietnamese migrants who were found dead in the back of a lorry in Essex in October 2019.

DCI Stoten was one of a team of 12 dedicated police officers and staff who visited Vietnam to meet the families impacted by the tragedy, while DC Pasmore handled the identification of the victims. Following a 10-week trial, Romanian ringleader Gheorghe Nica, 43, from Basildon, and lorry driver Eamonn Harrison, 24, from County Down, were found guilty of manslaughter.

A West Midlands Police officer who played a critical part in preparing her region to cope with the pandemic received the QPM.

Detective Chief Inspector Jennifer Pearson spearheaded the transformation of an aircraft hangar at Birmingham Airport into a temporary mortuary, bringing in key people and contractors and ensuring the work was completed in good time and £5million under budget.

DCI Pearson said finding out she will be among the small group of exceptional officers collecting a QPM at the Palace next summer was “an amazing feeling”, adding: “It’s a real honour – when your chief rings and says ‘I know your secret’, it’s like ‘wow, gosh it really is true and I’m not dreaming this’.” 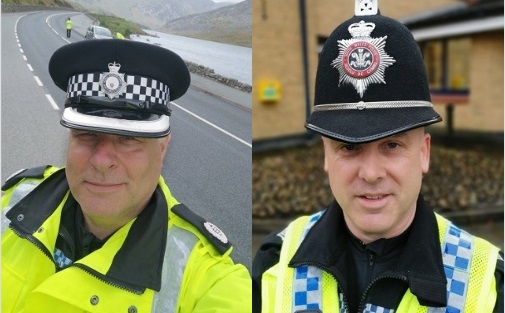 Special Chief Officer Mark Owen of North Wales Police was made a Member of the Order of the British Empire while South Wales Police Sergeant Timothy Barrell (pictured right) was also recognised with the QPM.

Special Chief Officer Owen of North Wales Police joined the Special Constabulary after an illustrious career in the same Force. Prior to retiring in 2012, he was in charge of the Force Control Room, and started his police service on the beat in Wrexham.

In addition to local policing roles, which included being the Temporary Superintendent Operations covering Anglesey and Gwynedd, he worked in Operational Support, Roads Policing, Community Safety and HQ roles. He also served a period of secondment to ACPO (Association of Chief Police Officers) at national level and served abroad, in the Balkans, as part of a secondment to the Foreign and Commonwealth Office.

Sergeant Barrell expressed surprise at the award and said: “I feel surprised to be honoured with the QPM. Policing is a difficult and challenging role and it’s all about teamwork - it’s a testament to the work of my team over the years.

“I’m as passionate about policing as I was when I joined up 20 years ago, and still feel excited driving to work every day and not knowing what will come next.” 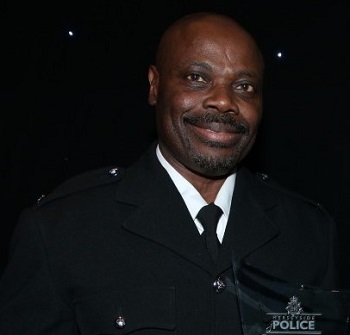 Chief Constable Andy Cooke expressed delight that Merseyside Police Constable Malique Jamal Al-Shabazz (right) was awarded an MBE for the work he does with local communities.

Chief Constable Cooke said: “Malique’s dedication and passion signify the very best of community policing and for the last 20 years he has served the community of Toxteth and the wider BME communities with a real desire and passion to make a difference and provide them with support.

“Malique is also a role model for new constables and has introduced a new process for probationers, which involves them spending a day with him learning about Muslim and Jewish cultures and how their policing style could affect these faiths and communities.”

Constable Malique Jamal Al-Shabazz added: “I’m really humbled by receiving this award and would like to thank the local community for all their help and support over the years. I felt truly humbled when I was told that I was receiving the award, particularly as I love doing what I do and the support I receive from my local community really helps to make my job so much easier.”

Suffolk Constabulary Special Inspector David Howse, who was awarded the BEM, joined the Special Constabulary in 2009 and provided resilience to the town of Haverhill while supporting his regular colleagues. His colleagues described him as ‘amazing and willing to do anything to help’.

More recently David worked with Highpoint prison intelligence staff to conduct visitor drug operations, which involved the coordination of special constables to search visitors who were suspected of bringing contraband items into the prison.

David Thompson QPM, the Chief Constable of West Midlands Police since 2016 and Vice-Chair of the National Police Chiefs’ Council, receives a knighthood. 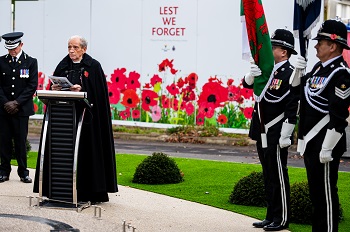 Reverend Glynne James, Principal Police Chaplain for South Wales, was also recognised with the BEM for dedicating more than six decades of his life to serving his country and community.

Rev James (right), who has been a priest for 36 years in his local community, was in the armed forces in the far east before joining Swansea Borough Police in 1964. During his successful career he undertook various roles, including helping his colleagues handle stress and mental health issues as a welfare officer.

In 1996 he retired from the force and was appointed as the first police chaplain in Wales where he continued to assist officers, staff and their families by opening remembrance gardens for the fallen, holding services and developing the chaplaincy.

Reacting to the honour, he said: “When the Cabinet Office contacted me, I thought they had come to the wrong person. It was a pleasant shock which left me speechless and I feel touched and humbled that people have that trust, faith and belief in me.”

Members of the Order of the British Empire (MBE)

Melanie Elliott, Volunteer, SafeLives. For services to Victims of Domestic Abuse in Norfolk