The association for British police officers has been hit by a malware attack at its Surrey headquarters.

The Police Federation of England and Wales (PFEW) today said it fell victim to an attack on 9 March, and said it had put steps in place to isolate the impact and reduce the risk of it spreading.

“There is no evidence at this stage that any data was extracted from our systems, but this cannot be discounted,” the organisation said in a tweet.

The PFEW said it had no indication the attack had spread to other branches, but said there had been some disruption to services. 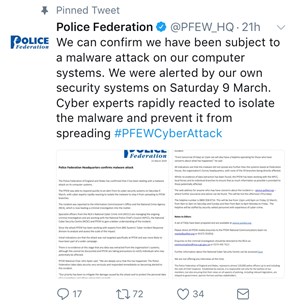 “At this stage the risk of data being extracted or misused is low; we wanted to alert those we hold data on as to the risk at the earliest opportunity,” it added.

The cop association said it has contacted individuals who are potentially affected “as a precaution”.

The malware attack comes as the government tries to raise awareness of the dangers of cyber attacks after research revealed 25 per cent of FTSE 350 companies do not see cyber security as a high priority.

New guidance rolled out by the government and the National Cyber Security Centre (NCSC) has urged firms to protect “crown jewels” whose loss or damage would cause significant harm, such as personal data, intellectual property or public-facing websites.

The incident has been reported to the NCSC, the Information Commissioner and the National Crime Agency, which have opened a criminal investigation.