Detective Sergeant Nick Bailey was wearing police-issue gloves when he grabbed the handle of Sergei Skripal’s front door soon after the former Russian spy and his daughter were poisoned — but if he thought that would offer him protection, he was wrong.

Mr Bailey was contaminated by the deadly novichok gel that was smeared on the handle and he too ended up in hospital.

Traces of the nerve agent were also found at the foot of Mr Skripal’s front door, indicating that the attempted assassination was done “messily”, The Times has learnt. This has raised the possibility that specks of novichok had been on the shoes of Mr Skripal, 66, and his daughter Yulia, 33, as well as on their hands, potentially widening the scope of a “novichok trail” around the city. 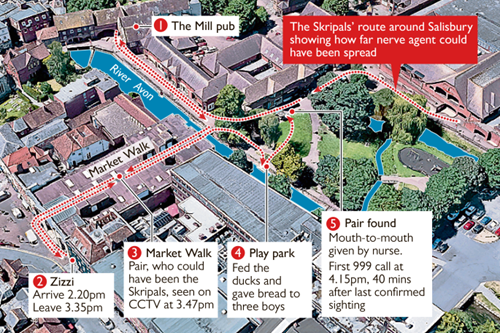 Two months after the poisoning officials have yet to identify any suspects, and parts of Salisbury still look like a crime scene. Mr Skripal remains in hospital and his daughter is in hiding.

Offering new details on the March 4 attack, a source with knowledge of the case revealed that the first person to respond to the Skripals when they passed out was an off-duty army nurse who had worked on the ebola outbreak in Sierra Leone. The nurse, a commissioned officer who has asked to remain anonymous, treated them before the emergency services arrived, and was vomited on but is not thought to have suffered novichok poisoning.

Police have yet to locate the object used to smear the novichok gel on the front door of Mr Skripal’s house, despite searching park benches and bus stops within a two-mile radius, the source said. No security cameras were trained on the front door, even though Mr Skripal was a former MI6 agent who had been brought to the UK from Russia as part of a spy swap in 2010.

According to the source there is a concern that Mr Bailey could have unwittingly contaminated the Wiltshire police offices when he returned to the station to file a report. Two parts of the Bourne Hill building are closed as part of the decontamination operation.

At lunchtime on the day of the poisoning, the Skripals had ordered a set menu at the local branch of the Italian restaurant Zizzi but left before having dessert; an indication that they had started to feel unwell, the source said. They are believed to have taken bread, potentially contaminating it, to feed the ducks in a park near by. There they encountered three boys. They gave them some of the bread to feed the ducks, and one of the boys ate some. He was given the all-clear by doctors, a lucky escape that potentially exposes the limitations of novichok.

The Skripals then went to the bench where both collapsed, unconscious. The manager of a shop a few metres away stopped to put rubbish in a bin next to the pair at about 4.10pm, minutes before the alarm was raised. “[Mr Skripal] was sitting upright, eyes closed, and she was lying with her head in his lap. They were not making a noise,” the shop manager, who asked not to be named, said.

The Skripal investigation is one of the biggest in British police history. It coincides with a complex clean-up operation at nine sites in and around Salisbury that is being overseen by the Department for Environment, Food and Rural Affairs, with help from 190 military personnel trained in dealing with chemical weapons.

Novichok was designed in Soviet times to avoid detection by devices used by the UK and its allies to identify nerve agents. Anything that may have been exposed can only be given the all-clear after a painstaking process of sampling and testing. Novichok nerve agents cannot simply be washed away by rainwater and must be specifically treated.

Porton Down, the government’s defence research laboratory, has a furnace for destroying contaminated material. The scale of the task is so great, however, with several vehicles, including two ambulances, among the items listed for disposal, that the government may have to bring in an outside contractor to help.