A police force has been slammed for posting a 'ludicrous' Twitter poll asking people to cast their votes on which village officers should patrol.

Wiltshire Police were immediately deluged with complaints from irate residents who claimed it tipped off criminals as to where officers would be.

John Miller, 71, from Ramsbury, near Marlborough, said: 'What a stupid idea - you can almost imagine the criminals voting en masse, hoping to place enough votes to send the police to patrol one area so they can clean up somewhere else.' 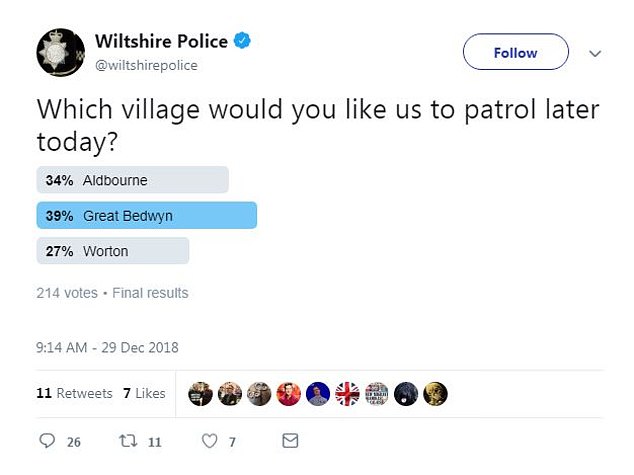 Though much of Wiltshire is rural, it does have the major urban areas like Salisbury, scene of the Russian poison 'hit' earlier this year, and Swindon, where 'county' lines' drug runners operate.

Yet Wiltshire Police used Twitter to reach out to residents asking them: 'Now where would you like us to patrol today?'

One user wrote: 'Wow, a poll to see where to patrol ? What next - a lucky dip to see who to arrest!'

Another user said: 'So the criminals will be hitting Worton and Aldbourne later then.'

One Twitter user said: 'What next, a poll on what crimes to investigate or suspects to charge? They could patrol by drone. What could possibly go wrong?'

And another user said: 'Is this a joke? If it is it's not very funny @wiltshirepolice If it's serious you need to think about the message it sends out.'

Later Wiltshire Police posted pictures updates from patrols around the villages where they posed next to dogs, ducks and flowerpots.

A tweet from Marlborough showed a photo of a large flower pot with the caption 'Spotted a lovely display by Kennet Place!'

A final tweet showed a cup of tea and a plate of biscuits with the caption 'Final scores on the doors - 18,000 steps walked. 100 miles driven. 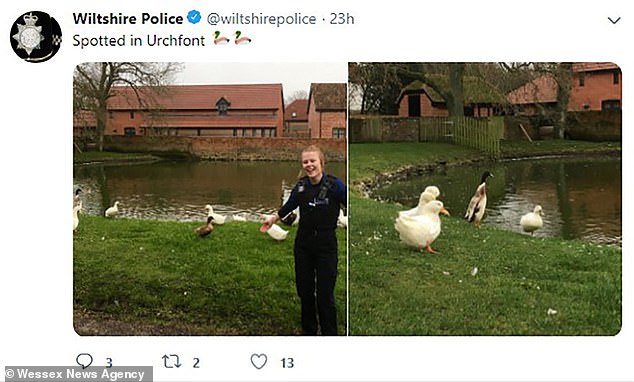 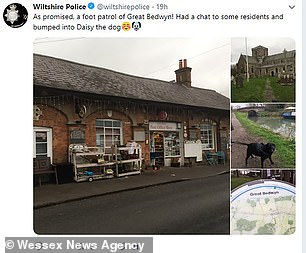 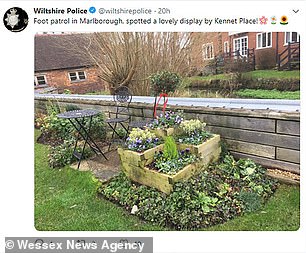 A tweet from Marlborough showed a photo of a large flower pot with the caption 'Spotted a lovely display by Kennet Place!' (right)

Mr Miller said: 'Who came up with this idea - it's ludicrous and crass. Talk about dumbing down'

'It's like they're kids at play instead of serious police officers. This is reducing our police to the level of a Eurovision Song Contest or the final of Strictly Come Dancing.'

The force posted back: 'Not meant as a joke. We continually patrol rural areas. We are promoting our work and engaging with the communities.'

Mr Lawrence said in response 'It's commendable but how do people who don't use social media get a say? Who decides which areas go on the poll? What happens in the places that don't win the vote?' 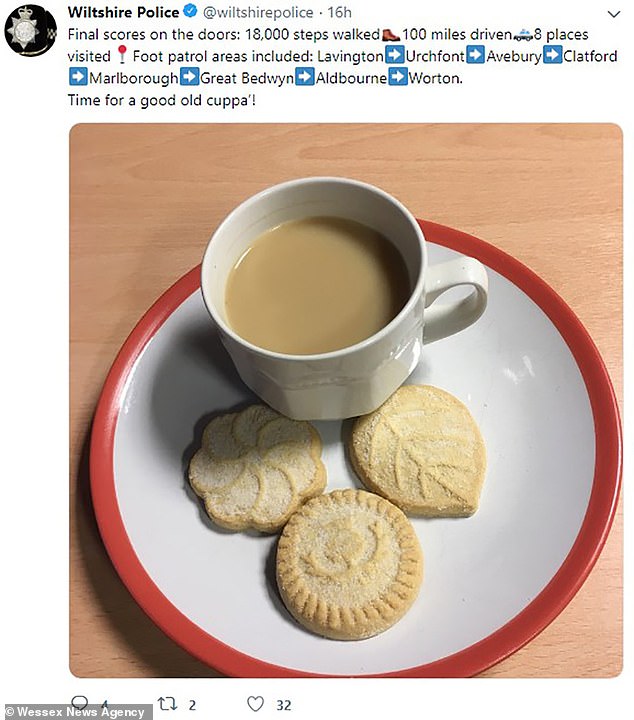 A final tweet showed a cup of tea and a plate of biscuits with the caption 'Final scores on the doors - 18,000 steps walked. 100 miles driven'

One Wiltshire shopkeeper, who asked not to be named, said: 'Surely there has to be a better way than asking the people to vote where officers should go on patrol on any given day.

'My shop was burgled last year and I had a lot of stock taken, but it took ages for the police to send anyone, and a few days later I was robbed again.

'We need police out on the streets, that's for sure, but it doesn't seem very inteillgent or smart to tell the criminals where you will be sending your patrols.

'They're hardly going to pick those places to rob, are they? So the patrols will have a nice, cosy stroll around the village, enjoying the sights and taking photographs to put on Twitter, painting a picture of it all being nice and peaceful.

'What's to say the burglars and rowdies aren't watching and waiting for them to get back in their patrol cars and drive off?'