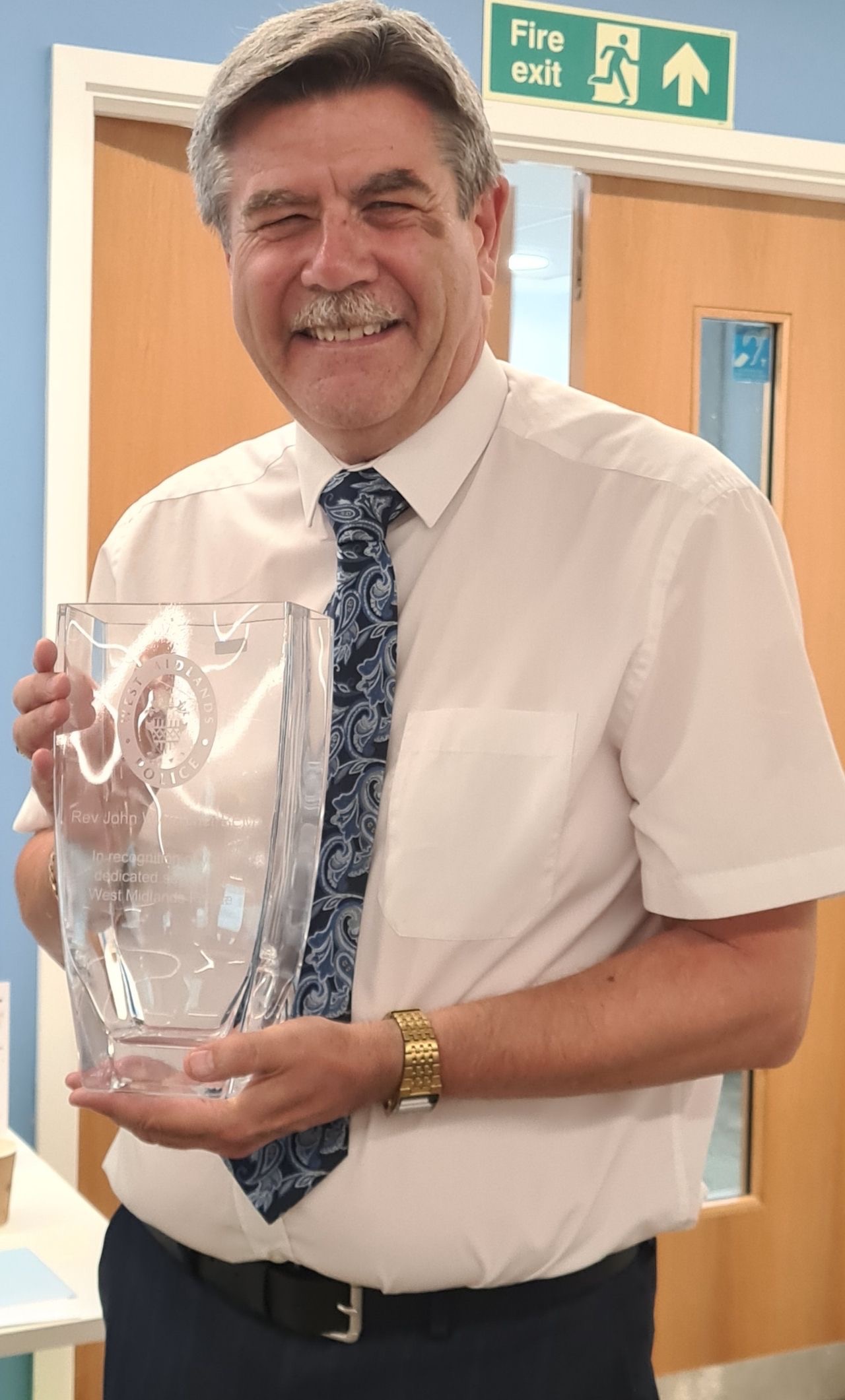 The Rev John Butcher with his retirement gift.

After spending three years studying to be a minister at Bible College, John Butcher never thought life would lead him into chaplaincy with the Force. Here we are, 30 years after he first started working with the police, John, now retired, looks back at his captivating career, which saw him successfully grow the West Midlands chaplaincy team from just four to more than 150 volunteers across the region.

“Well, my story started when I was in Hackney,” 66-year-old John began.

“I’d trained as a minister and moved down to London, with Hackney being my first church. The community had gang-related problems that included drug crime and multicultural issues. It was in the period of the Gulf War, and the police wanted there to be calmness in the area, so they got in touch with me and other people of different faiths, in hope that we would begin to work together to tackle some of the problems.”

Having been contacted by the Met Police, John started venturing out with officers on a couple of shifts. However, never did he imagine that a ‘little visit out with the police’ would lead to him volunteering and working with the police service for the next three decades.

“I did a night shift with them which was surreal. I was shocked to see what was actually happening at 3am, at a time when I thought people were asleep and tucked up in bed,” explained John, who, having had such a positive impact on officers, was asked to volunteer more permanently with the Force.

“And I was delighted to help out,” he continued. “Of course, I started helping out for two to three hours a week, and that grew and grew. The officers I worked with were so welcoming, I made a lot of friends during my time there.”

John continued to volunteer with the Met up until 20o2, before moving up to Birmingham to take on a local church and join West Midlands Police as a voluntary chaplain.

In 2009, having spent seven years volunteering with West Midlands Police, the Force’s lead chaplain was leaving and recommended John to take on the role.

Following an interview, John took on the role of lead chaplain part-time, upon the agreement that he would build a team of volunteers to support him from local stations across the West Midlands.

He recalled: “I was doing two days, then three and I was gradually growing the team to 10, then 20, then 30 and now we’re on 131 chaplains and 20 faith advisers. Of course, as the team grew, my job grew too and I was soon working with the force full-time.”

John says it is ‘unbelievable’ to see how much the chaplaincy team has grown. He added: “Although the role of officers has changed, they will always need our support. In fact, the need for support for officers has grown over time, due to the increasing pressures and stress of the job.”

John believes that the chaplaincy team has three main roles, and that is to support officers and staff across the Force, to help train teams so they understand all the faiths better, and to network with members of the local community and the police.

“All the volunteers within the team are from different backgrounds or faiths, so they can understand so many issues that occur across the West Midlands,” he explains.

“If people come to me for advice or support, I know that if I don’t know the answer, my volunteers will. They are a very valuable team.

“And I firmly believe that the more the community and police work together, the better it is for everyone.”

John said it is an honour to be a part of the ‘police family’. He added: “I really respect the police for how they deal with their emotions and the situations that they are put in linked to their role. I have seen some of these horrific situations first hand. The police are human beings and need all the help and support that we can give.

“Although I’ve never been a police officer myself, I am so thankful for them and the work that they do.”

A highlight of John’s career was of course being awarded the BEM (British Empire Medal), an achievement that was celebrated this year - having been delayed due to the Covid-19 pandemic - with a visit to one of the Buckingham Palace’s garden parties. 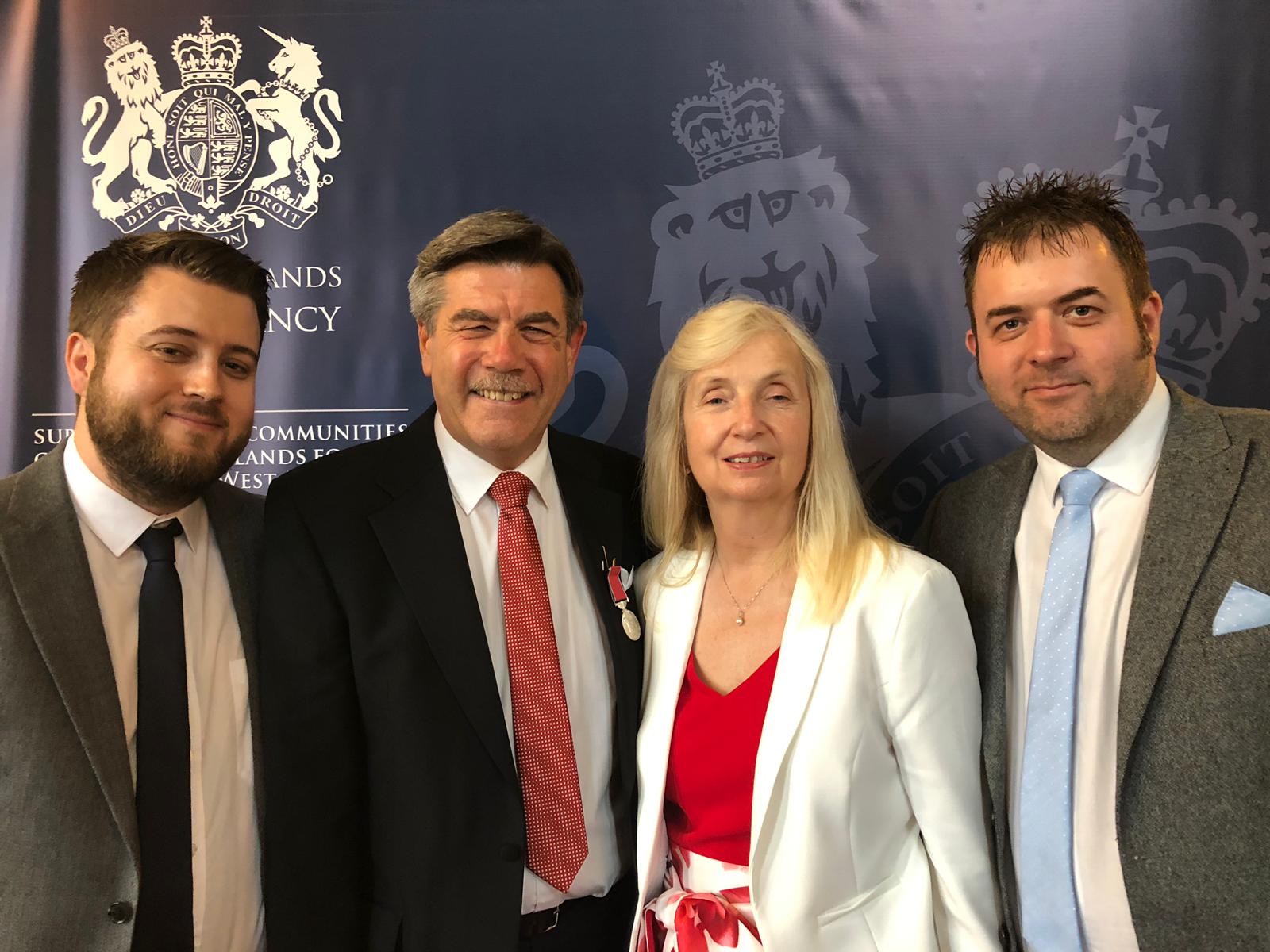 John and family on the night he received the BEM.

“Being honoured for my work was a real joy and privilege that I will remember fondly for the rest of my life. Although it was a reflection of the work that I have done over the years I fully acknowledge that the great success is down to the fantastic team that we have,” said John.

“The police initiated the award and although I don’t do it for awards it is wonderful and humbling when the people you work for recognise the work that you do. It’s a lovely reminder of the positive difference that we are making.”

Alongside his BEM, John has also been recognised in the national Excellence in Diversity Awards and has also received a West Midlands Police Diamonds Award.

“It’s been a privilege to support people, make so many friends and hopefully make a positive difference to everyone that I have met over the years," said John.

“It seemed the right time to retire from the work that I have done for the past 30 years, with my last few weeks linked with the Commonwealth Games, which was an amazing event to be part of.

“The Commonwealth Games put Birmingham not only on the map nationally but internationally too. To see how the public, the different communities and the police all worked together was excellent. It was such a success, we’ve had so many positive comments as a chaplaincy team since.”

To kick off his retirement, John and his family took a much-needed holiday to Florida. However, he admits he is already getting messages from other forces asking if he would like to work with them and share some of his secrets to his success.

“I plan on getting involved with my local church where we now live, which I am sure will keep me busy, however, I’ll continue to help the police as much as I can,” he added.

“I’ve received so many emails and letters telling me of the difference I’ve made and people are sending me beautiful messages over social media. It’s lovely when you feel like you’ve made a difference.

“But now, my priority is spending time with my family. This is a big transition in life for me, but it’s an amazing time that I plan to enjoy as I head into a different season of my life.”