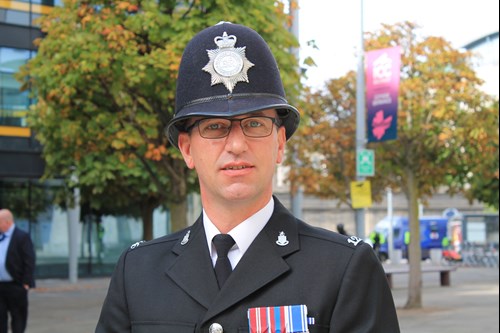 The police family gathering together is of immense support to those who have lost loved ones, Gloucestershire Police Federation has said.

Ian said: “National Police Memorial Day is a date in the calendar that I always prioritise. It’s so important that we remember those officers that have paid the ultimate sacrifice in giving their lives in the line of duty. It is an emotional afternoon, an emotional day, and for me personally. My wife died four and a half years ago. It would be our wedding anniversary tomorrow. So it is always extra poignant for me.

“But it’s so nice to be in the company of others from around the country, chief officers, fed reps, families of those that have lost loved ones. It just helps them to know that we’re all here, we’re all thinking of them, and we’re all immensely proud of the sacrifice that’s been given.

“We all work independently, we’re all very busy in our working lives. But you come to events like this and you look around at the police family and realise that what we have is quite special.”

Ian joined the Home Secretary and police chiefs, families, friends and former colleagues of the fallen at Waterfront Hall to pay tribute to officers’ commitment, courage and sacrifice.

Members of the Royal family, who would normally attend, were absent as they are still in mourning for HM Queen Elizabeth II.

The names of officers who lost their lives over the past year were read out at the event by Liam Kelly, chair of the Police Federation of Northern Ireland. They are: PC Daniel Golding, of the Met; PC Craig Higgins, of Greater Manchester Police; PC Alex Prentice, of Northamptonshire Police, and PC Darryl Street, of the Civil Nuclear Constabulary.

Home Secretary Suella Braverman, who gave a reading during the service, said: “To all the officers who lost their lives while working to keep us safe, we thank you and we honour you.

“Their bravery and commitment to their duty was unfaltering – society owes them and their loved ones a debt we cannot repay, but it is one we will not forget.

“As Home Secretary I make a promise to give police the powers and tools they need to do their jobs safely.”

During the service, candles were lit by relatives in remembrance of officers throughout the country who have lost their lives – one from each of the four nations of the UK.