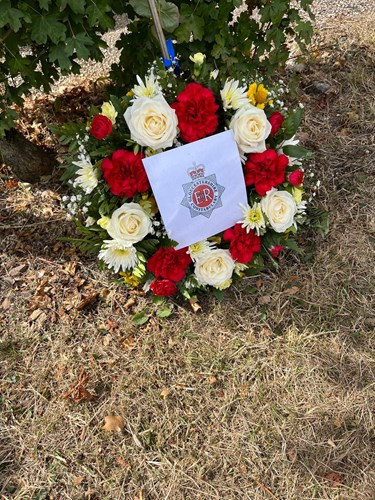 There was emotion and humour as police officers who have died on duty were remembered by their family and friends at the Care of Police Survivors (COPS) Annual Service of Remembrance.
Surviving family members and serving police officers gathered at the National Memorial Arboretum on Sunday August 21 to pay respects to officers who have made the ultimate sacrifice.
The service in Staffordshire – bathed in glorious sunshine – was attended by more than 800 people.
Events took place all weekend for surviving family members.
During the 45-minute service on Sunday, survivors recalled their loss and how the charity had helped them in their time of need.
The Roll of Honour for the police officers and who died on duty during the last 12 months was read out.
Those remembered this year were PC Amar Kalirai of the Metropolitan Police, PC Duncan McIntyre of Devon & Cornwall Police, PC Alex Prentice of Northamptonshire Police and PC Dan Golding of the Metropolitan Police.
Before the Service of Remembrance, The Police Unity Tour – over 300 cyclists who had ridden from across the country to the Arboretum in memory of fallen officers - arrived. The cyclists raise money for the COPS charity.
Also attending were the Blue Knights motorcyclists.