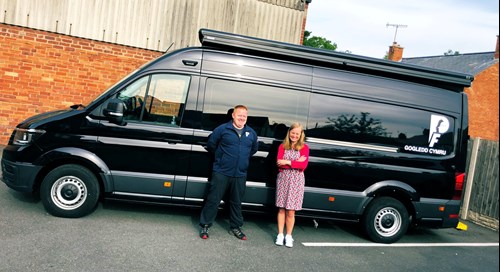 Officers policing the G7 Summit in Devon and Cornwall should keep their eyes out for a number of Police Federation welfare vans from around the country which will be on hand to assist the operation.

Welfare vans from Hertfordshire, Thames Valley and North Wales Police – which are either owned by the Federation branches or jointly owned with their forces – will be supporting the operation in Cornwall, to provide colleagues with hot and cold drinks, snacks and toilet breaks.

Devon and Cornwall Police Federation Secretary Jim Purkiss said: “They’ll be located in West Cornwall the majority of the time, along with two supporting Federation Reps who are going to come down with the vehicles and assist us. They’ll be deployed throughout the operation, roaming around locations within the Summit, mainly around accommodation, feeding stations and welfare hubs.”

He said: “I think the officers will find out how unique Devon and Cornwall is as far as the geography goes, and they’ll probably see the logistical challenges which come with where it is.

“However hopefully the weather will be good for them and they’ll see what’s on offer down here. We have numerous transferees to Devon and Cornwall for a reason – it’s a fantastic place to live and work and it usually has low crime levels.

“We’ll have a band of Federation Reps available 24/7 on the telephone if people have a problem that needs resolving. We are there for them and we want to make sure that they get what they need.”

Police officers from across the country will be given an on-call number for Police Federation Representatives should they be required during the policing operation.