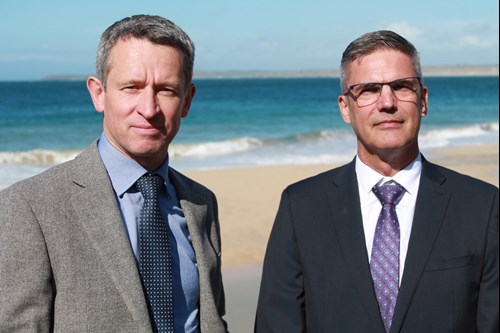 Officers are working “immensely hard” to prepare for the G7 Summit in two weeks’ time but challenges remain, Devon and Cornwall Police Federation has said.

The G7 Summit is being held in Carbis Bay on 11-13 June and will be attended by leaders including Prime Minister Boris Johnson, American President Joe Biden and German Chancellor Angela Merkel. It is the biggest police operation the force has ever seen, with officers being deployed from other forces in a mutual aid operation.

Andy Berry, Chair of Devon and Cornwall Police Federation, (pictured right) paid tribute to his Federated colleagues who were helping to prepare for the operation, saying: “They’re working immensely hard. Effectively they’re creating, albeit for a short period, the fourth biggest police force in England and Wales, with all the logistical support that it needs. That’s the magnitude of the task.

“They are doing an amazing job, as far as they can. But I think every one of them would say it’s not been an easy journey. We are two weeks out from the event and we still have concerns around some facets of the organisation, particularly relating to our own officers in force who are still not entirely sure what they’ll be doing on the operations. There’s a lot of detail around that which is causing officers anxiety.”

Andy said that there was still uncertainty over what hours and duties officers were going to be expected to work over the Summit, and that it was only a few months ago that the force realised it would need to deploy a lot more Devon and Cornwall officers than it had previously thought.

Andy said: “We told the force: ‘You need to start telling people now, because people are going to need to organise their lives.’ There are a lot of cops who are married to cops, or who have children and other caring responsibilities. We’re still concerned that we’re very close to the event and not everybody knows if they’re working on the Summit. And if they know they’re working, they don’t necessarily know all the details of where and when, and what their role is.”

He continued: “It is frustrating. We have repeatedly asked the force to increase the information going out to officers so they know what’s going to be expected of them. The force has responded, but the harsh reality is that even the force doesn’t seem to have the information at this point, not least because the Government’s Foreign, Commonwealth & Development Office keeps changing the plans for the event. Every change has a ramification for individual officers.

“The force is kind of held to ransom on that, but at the end of the day frontline officers are the ones who are most impacted.

“If you’re a constable and you’re going to be deployed to the operation… well they don’t feel they’re getting the information that they need to be able to understand what’s going to be expected of them and also to make arrangements with kids, family, even pets.”

Andy said that the Federation was focused on continuing to push the force for answers, pointing out that 4,000+ officers providing mutual aid in Cornwall from other forces had volunteered to work at the Summit as part of mutual aid, but Devon and Cornwall Police officers “aren’t getting a lot of choice”.

He concluded: “It’s our role to work as a critical friend to the force. We can assure our members that pretty much every day it’s our focus to get the force to get the information out. We’re almost at the beginning of June. We shouldn’t be where we are. We should be far more settled in terms of the planning and that, I think, makes us nervous that we’re not as planned and prepared as we should be.

“It’s a real concern that because there is now such a massive push to get it all done, so late in the day, there’s the possibility of errors, possibility of cops putting their hands up and saying, ‘I’ve got nowhere to stay’, or, ‘What am I doing here?’”.

“We shouldn’t be in the position we are now. Officers should have been informed many, many weeks, if not months ago, of the impact this will have on them. We have raised these concerns with the force at every opportunity we’ve had. The logistics of this will go right up to the wire, but we are here for our members and we will continue to raise their issues.”