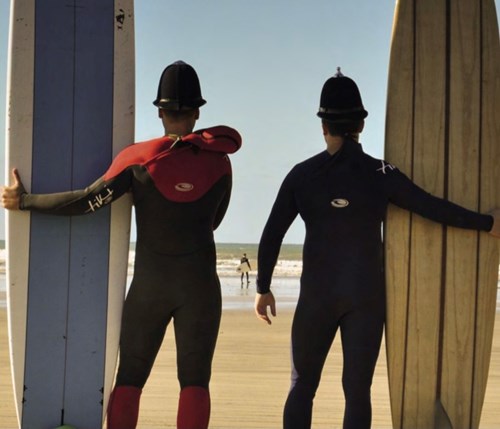 Surfing has been found to be good for the mental health and wellbeing of police officers – according to a study from the University of Exeter.

The longer-term benefits included greater resilience to cope with stress, increased hope of coping with difficulties more effectively, improved optimism and a stronger belief in their own ability to improve their wellbeing.

According to the University, the police force in turn found officers who had been on the programme took less sick leave, were more likely to stay in their jobs and developed a more positive view of their profession.

Researchers studied a group of 20 police officers (six females and 14 males aged 36 to 59), all of whom had experienced mild to moderate work-related mental health difficulties.

Around three-quarters of the participants described feeling completely absorbed by the activity of surfing, with the single focus of catching the next wave “pure exhilaration”, according to one participant.

The participants also said that being among their fellow police officers during the sessions made them feel more secure and understood, as “they were going through the same thing”.

The surfing facilitators’ background as police officers was also deemed important in the programme’s success, as their support was perceived by the participants as more genuine.

Three-quarters of participants said that because the facilitators who run the sessions understood the unique nature of being a police officer, they felt more connected and were more likely to be open with potentially traumatic information they had previously not been able to share with anyone else.

Nearly 10,000 police officers took time off due to stress, depression, anxiety and post-traumatic stress disorder in the UK in the past year.

“This is a significant finding in a context in which increasing numbers of UK police officers are taking time off with mental health issues,” said Professor Marwa Tourky, who undertook the research with Professor Will Harvey, Associate Dean Global at the University of Exeter Business School.

“It is also important in a coronavirus context where health and wellbeing challenges are likely to increase in the coming months and years because of latent accumulation of stress.”

Andy Berry, Chairman of Devon and Cornwall Police Federation, said: “The welfare of officers is important and keeping officers well or getting them back to work when they are not is hugely important.

“It is important for our members but also for the public who want to keep officers on the street.  Consequently, I am pleased that the Chief Constable has been prepared to support this project.”