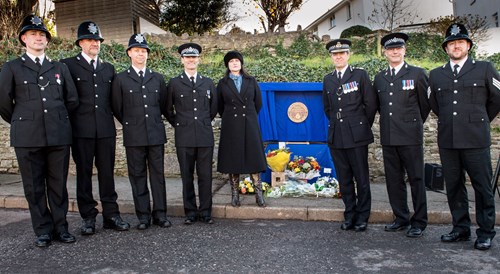 A Police Memorial plaque has been unveiled in Torquay to remember a murdered police officer, who died almost 50 years ago.

PC Dennis Smith QPM was shot three times in 1973 on Rosehill Road by a man who then stole his police car and went on to shoot three others at a casino - before being arrested in Newton Poppleford.

Andy Berry, Chairman of Devon and Cornwall Police Federation said: “It has been an honour to be there, particularly to meet some of the colleagues of Dennis including those working that night.

“It is absolutely right that we remember his sacrifice and recognise that serving officers can never be 100% certain of getting home once they get out on patrol.”

Devon & Cornwall Chief Constable Shaun Sawyer today said: "When an officer does give their life in the service of the public days like this are important - that we do remember that ultimate sacrifice as we do for other services."

Geraldine Winner, wife of the late Police Memorial Trust founder Michael Winner, said: "My late husband decided that all these policemen who risked their lives every single day should be remembered so that people realise that the police are not against you, they're the ones who are saving us.

"They're like soldiers and sailors during a war, and the war is everyday for them.

"Every single day they don't know whether they're going to be murdered, cut up, or dragged behind a car. The most terrible stories happen.”