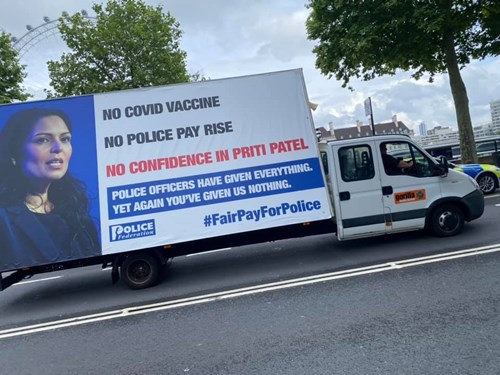 "Police officers have given everything. Yet again, the Government has given us nothing”

That was the message taken to the heart of power as police officers from across the country came to Westminster to voice their fury at their treatment by the Government.

A huge billboard – organised by the Metropolitan Police Federation – carrying the message “No Covid Vaccine. No Police Pay Rise. No Confidence in Priti Patel” accompanied the officers at it reminded those working in The House of Commons, The Home Office and 10 Downing Street of how the Government has betrayed the country’s hard-working police officers.

Brave colleagues who risked their safety – and sadly that of their families – as they kept people in the country safe over the last 18 months of the Covid-19 pandemic were awarded a 0% pay rise by Government at the end of July.