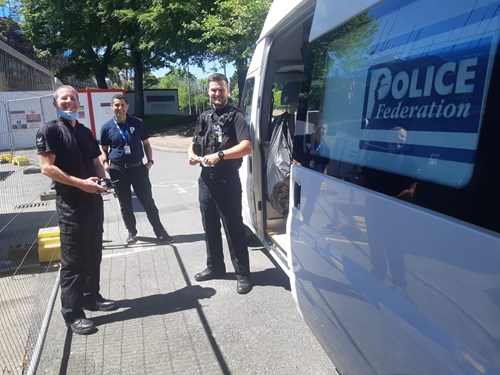 Devon and Cornwall Police Federation has praised officers from the force and across the country for their dedication and hard work after a ‘long hot week’ policing the G7 summit passed off without major incident.
Hosting the meeting of world leaders at Carbis Bay on Cornwall’s Atlantic coast was a massive operation with some 6,000 officers from forces across England and Wales drafted in to support.
Only a handful of arrests were made during the operation, and pleasingly no officers were injured as protests and demonstrations from several groups largely took place peacefully.
“From a policing point of view, we achieved everything we wanted to; it was a safe event which passed off free of disruption,” Devon and Cornwall Police Federation Chair Andy Berry said.
“We have to thank all the officers involved, as it was their hard work which delivered the event, and a thank you too to all the Devon and Cornwall officers who have kept the ‘business as usual’ policing going despite long hours and shift changes.
“It was a real team effort.”
Andy said officers had also received a fantastic response from the Cornish public despite the disruption.
“The public were amazing and really cheered up officers tired of all the long hours; there were some really positive examples of police engagement, kids dressed up in police uniforms and posing for photos with officers, for instance.
“They even brought out officers drinks and chairs to sit on if they needed one, so it was very positive, and a big thank you has to go to the public for the way they welcomed everybody – officers have enjoyed getting that positive feedback.
“As far as I’m aware, no officers were injured, which is a massive result.”
The hot weather had put extra emphasis on officer welfare throughout the event, Andy added, and the Federation, alongside welfare van support from other forces, made sure they had what they needed to get the job done.
“We can be proud as a Federation of our response and of the support we gave members and to the force,” Andy said.
“A thank you to my team and to the Reps from Thames Valley, Hertfordshire and North Wales who brought down welfare vans which were a huge hit.
“We showed our Police and Crime Comissioner one of the vans, so we hope one of the legacies of the event will be that we’ll be able to purchase a van ourselves.
“It was a long hot week, so our Reps were out there supplying water, sun cream and insect repellent where it was needed.
“There was a 24-hour welfare line, and we got out there and visited officers wherever we could at cordons and feeding centres.
“Myself and [Federation Secretary] Jim Purkiss also worked with the command centre to raise any issues and be that critical friend.”
Given the high-profile nature of the event and the threat it could be destabilised by potentially violent protests, it was a relief and that it passed off with any significant issues, Andy added.
“There were very few arrests, few crimes and only as we understand it only four complaints against officers, all of which is incredible, it was surprising, and it was a big ask on us as a force to put this on in the middle of a pandemic.
“There were bumps, and there were bound to be in an event of this scale, but everyone worked really hard to overcome them.
“I’m very proud of everyone involved.”