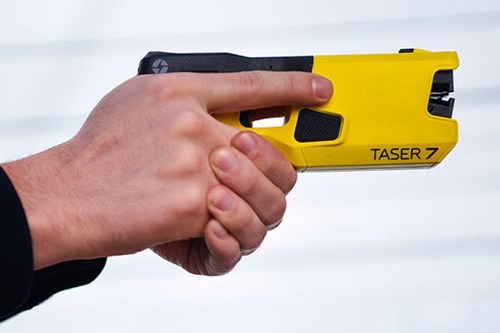 The Chairman of Devon and Cornwall Police Federation branded this week’s unbalanced Independent Office for Police Conduct report on police use of Taser as perverse.
Andy Berry was responding to the ‘Review of IOPC cases involving Tasers’ report, where the watchdog raised concerns with Taser guidance, training and scrutiny.
The report has been slated by a uniformed voice in policing, with The National Police Federation of England and Wales dismissed the review as “statistically insignificant”.
It stated: “This report makes recommendations on 101 IOPC investigations into Taser use in a five-year timescale. However, there were almost 100,000 recorded Taser usages in this period, so it is statistically insignificant.”
And police chiefs said the report by the IOPC is “vague, lacks detail, does not have a substantive evidence base.”
Andy said: “The IOPC seemed to have missed the point here and the headline should be ‘Cops almost never get it wrong’. Over 5 years and near on 100,000 uses, to try and draw any negative inference on 100 uses is perverse.
“Taser has provided the police with a relatively new and brilliant tool to help keep them and the public safe whilst minimising the likelihood of injury to the person offering threat. It’s so much more humane than having to use our steel batons to try to restrain people and more effective, in my view, than using incapacitant spray.”
Andy added: “Officers are trained to a high standard to be able to use Taser. This training is constantly reviewed.
“The IOPC have made much of the use of Taser against young or vulnerable people. No officer wants to use Taser but they use it when subject to the threat of injury. Vulnerable people wielding a knife are no less dangerous to themselves, the officer or public than anyone else. Anyone with a modicum of practical common sense would know this.
“There are far too many officers who are subject to assaults and these numbers are growing and the use of Taser to offer some protection should not be diluted due to a biased report.
“In my force, too many officers have to respond to incidents either alone or knowing that back up is a long way away and Taser is a critical piece of kit that can keep them safe.
“Frankly, I believe the IOPC have searched the back of their cupboards to look for a problem which isn’t there.”
Chief Constable Lucy D’Orsi, speaking on behalf of The National Police Chiefs Council, said: “Unfortunately, this report by the IOPC is vague, lacks detail, does not have a substantive evidence base and regrettably ignores extensive pieces of work that are already well underway and, indeed, other areas where improvement could be made.
“I advised the IOPC of my concerns and am extremely disappointed that it did not engage with policing, attend a Taser training course or consult the national independent experts who we work with whilst undertaking its initial research.
“Only 101 Taser uses over a five year period were reviewed and these were all ones that had been investigated by the IOPC. It is concerning that this only represents 0.1 per cent of all Taser uses in the same period, which totals 94,045.”