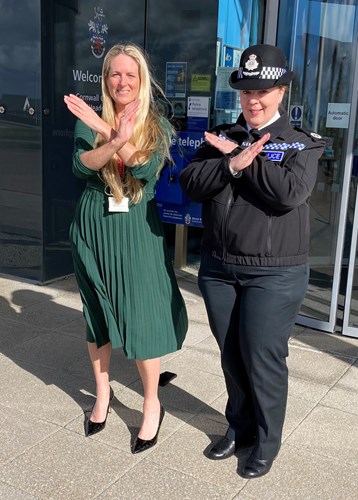 The police service has come a long way but there is still much work to do to achieve gender parity, Devon and Cornwall Police Federation’s Equality Lead has said on International Women’s Day.

Sue Honeywill, who is also Vice-Chair of PFEW’s National Women’s Group, said that the police service she joined 25 years ago, when female officers were called WPCs, was very different to how the organisation looks today.

She said: “When I joined, despite making up half the population, women accounted for just 15% of officer numbers. Although we have made great progress with the uplift of female officers, we still have a way to go to ensure true representation.

“Women remain underrepresented in terms of overall numbers, but particularly within certain departments and in senior leadership positions, and police uniform is still an area that the Federation is making representations about to ensure inclusivity.

“The International Women’s Day theme this year is ‘Break the Bias’. This is a theme that underpins an element of the core work the Federation undertakes as we continue to fight gender equality issues our members are faced with.”

Sue continued: “Devon and Cornwall Police Federation itself has made huge progress in increasing representation from female colleagues. But there still seems to be a reluctance for female officers to get involved, so we need to champion for change.”

Sue said that as a female PC and later Sergeant in a male-dominated environment, she had experienced bias herself, which made her passionate about equality and fairness, adding: “That’s a huge part of why I became a Fed rep in the first place.”

She said: “People have said to me in the past: ‘You don’t look like a police officer’. And when I was expecting my second child, I was asked whether I would be returning to work after the birth.

“I know that no offence was meant, but this is the type of bias that some people still may hold and was an assumption that, due to the fact I was a mother, I may not wish to continue my career as a police officer. Flexible working exists to retain valuable officers’ skills, and colleagues should not be put off from applying.

“At the end of the day, it’s about having the right people in the right jobs, with the right skills, no matter their sex. There’s some great work being undertaken within Devon and Cornwall to encourage positive change, staff are receiving bystander training, and it just shows the investment the force is taking to tackle any bias and to educate.”