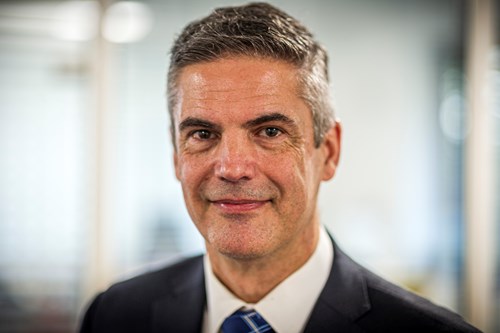 Andy said that over the next three years he will continue to drive forward improvements for members, especially around welfare, fairness and workloads.

Andy said: “I love this role, not just because it is an honour to represent our Federation members at important occasions both in force and nationally, but also because it gives me the opportunity to give an ‘unfiltered’ view of the world to our senior leaders.

“I’m absolutely over the moon to be able to continue as Chair of Devon and Cornwall Police Federation for the next triennial period, and I’m really grateful for the support I’ve had to get here again.

“Managing a £330 million organisation [the force] is undoubtedly a tough job, needing lots of tough decisions but I see my number-one priority as ensuring that the voice of the Federated ranks is always heard by the Chief Constable and his team.

“The past three years have been an unusual time for our Federation Branch and it has often felt like we have rolled from crisis to crisis.

“We have had to restructure to become fitter and leaner, we have had to deal with a national cyber attack on the Federation (going back to a pen and paper wasn’t fun), and there was COVID 19, G7, and COP26, to name but a few issues.

“Looking forward to the next three years, I hope that we as a Federation Branch can drive forward our own priorities, rather than always reacting to external factors.

“Our local priorities are member-focused and have been developed by our Branch Council. Our strategy has quite a wish list, but comes under three broad headings – welfare, fairness and the ability for officers to achieve.

“Under the first two headings, there is the need for decent shift patterns, decent buildings to work in, an excellent OHSU, the ability to be able to take leave when you need it, and fair process relating to promotion, posting and flexible working.

“The final element is the need for the Chief Constable to build a force where officers get the training they need, get the equipment to do their job, that the demands of the job are achievable, workloads are manageable and that the patrol function is recognised for the specialism it is and not just a place to breed officers for other roles.

“Talking with my opposite numbers from other forces, I recognise that actually ours is pretty good, but there is still much work to be done after a decade of austerity.

“I believe that the Federation must be a critical friend to the force and help it become world class. I also firmly believe that the best way the Chief Constable can achieve this is to focus on his people and make Devon and Cornwall Police a place where officers and staff love to work. Just imagine the energy and what could be achieved if everyone loved coming to work.”