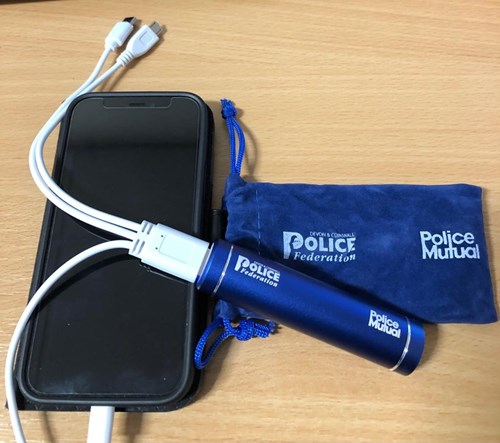 Devon and Cornwall Police Federation is welcoming police officers providing mutual aid at the G7 Summit by giving them all a portable power bank to charge their phones.

All Devon and Cornwall Police officers will also receive the power bank – sponsored by Police Mutual - whether or not they are working at the Summit.

Devon and Cornwall Police Federation Chair Andy Berry said: “Policing the G7 Summit is the biggest event the force has ever organised, and the biggest event for us as a Federation. We wanted to give officers something to recognise this, and one of our team suggested power banks to charge your mobile phones.

“We all felt that really chimed with the event. The nature of the Summit is that police officers are going to be stuck either on cordons, in vehicles, or away from a power point. Officers are going to get downtime so we thought let’s make sure their phones are charged so they can stay in contact with their family, see what’s going on in the world or even play Candy Crush!

“All Devon and Cornwall Police officers will get one as well. It’s important to us that, although the ladies and gents working on the event will be really busy, everybody keeping the wheels running in the rest of the force is going to be busy as well.

“So it’s something for everybody, because it is a big team effort to make this event work, whether or not you’re down here guarding the seven biggest world leaders of the world or you’re dealing with a domestic incident over in Honiton.”

Mutual aid officers and Devon and Cornwall Police officers who are working at the G7 Summer will receive their power bank when they arrive at the briefing centres. Federation Reps will also be on the ground distributing them across the two counties.

Andy added: “For Devon and Cornwall Police officers in our home force, the ones that are doing the business as usual, we would just ask for patience because it might take a little bit longer to get the power banks to them, as they won’t be going through the briefing centres. But we believe everybody deserves this recognition and this little thank you.”