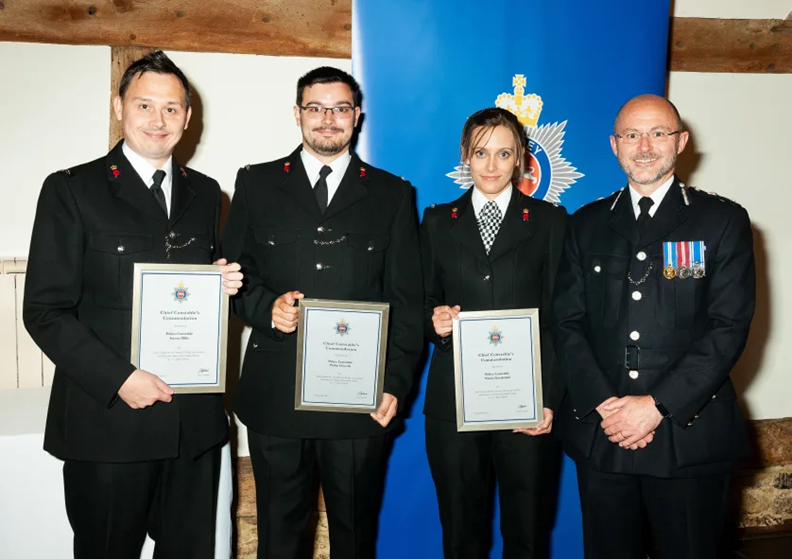 Several Surrey Police officers have been commended by the Chief Constable for their outstanding actions of bravery and professionalism.

The award ceremony, which was hosted on Thursday 12th September highlighted just some of the incredible work being done by officers on a daily basis.

Chief Constable Gavin Stephens said: “The ceremony recognises some of the many outstanding efforts and achievements of our police officers, staff, volunteers and members of the public.

“I am incredibly proud of all the officers and staff who have been recognised for their dedication and commitment to policing and am delighted that their efforts have been rewarded.”

Among the nominees were PCs Goodchild, Howells and Mills who attended an incident where a woman was wielding an axe and a large knife. She had also dowsed herself in petrol and there was real concern for her welfare.

The officers were unable to convince her or to drop the weapon which resulted in her throwing the knife at PC Howell’s leg. She resisted PAVA spray but despite this the officers managed to restrain her, all three sustaining minor injuries.

PC Stevie Spurgeon jumped on to a train track to save the life of a woman who had walked off the platform edge. It later turned out the woman was partially sighted.

DI Paddy Mayers, DS Mark Pendleton and DC Timothy Budd were handed commendations for their work in investigating the murder of Scott Wilkinson back in 2016.

They were driven and dedicated to solving what turned out to be a complex murder case.

Their hard work meant the three men responsible for the murder were sentenced to a total of 46 years imprisonment.

Also amongst those commended were members of the Runnymede Safer Neighbourhood Team who helped to ensure a man who regularly climbed buildings and structures illegally was stopped.

He first came to the attention of PC Anita Clark after he scaled a large rollercoaster at Thorpe Park. Working closely with colleagues, other forces and the Merlin Entertainment Group the necessary evidence was gathered and he received a five-year Criminal Behaviour Order.

PC Clive Farnham was also praised when he confronted a group of three men, two of whom had knives, whilst off duty. He chased the men through a shopping centre where he arrested one of the men, before managing to subdue and detain the other two with help from security staff.

DC Fiona Clare also received a commendation for her hard work obtaining 14 charges against an elderly man who had sexually abused two girls. Fiona’s dedication meant the man was sentenced to 12 years in prison.

In a special presentation, DI Gareth Hicks received a Police Long Service and Good Conduct Award. DI Hicks joined the force in 1999 as a response officer, before becoming a detective. He currently works in the force’s Serious Organised Crime Unit and is also the South East Regional Lead in hostage and crisis negotiation.