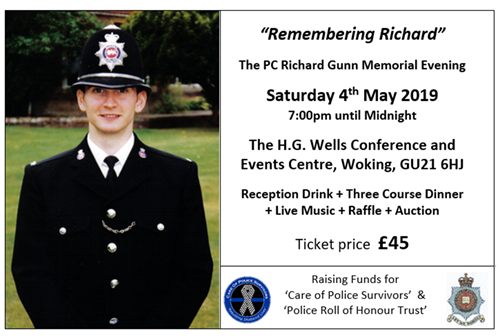 The PC Richard Gunn Memorial Evening Charity Ball will be held on Saturday 4th May 2019 at the H.G.Wells Conference and Events Centre in Woking.  The venue is a few minutes walk from Woking Railway Station and a short drive from the M25/M3 junction.

PC Richard Gunn lost his life in the execution of his duty with Surrey Police on 14th March 2004.

The charity ball is being held on May 4th as Richard was an avid Star Wars fan and the phrase ‘May the Force be with you’ is a nod to both the film franchise and the Police.  The event will raise funds for the two police charities for which Richard’s father, Denis Gunn, volunteers as a Trustee.  Denis is the current National President for ‘Care of Police Survivors’ (COPS) and is Membership Secretary for ‘The Police Roll of Honour Trust’.

The event includes a welcome drink followed by a 3-course meal, coffee and mints.  There will be a raffle and auction.  A very good live band has been secured for the evening.

To purchase tickets or for further information, please email