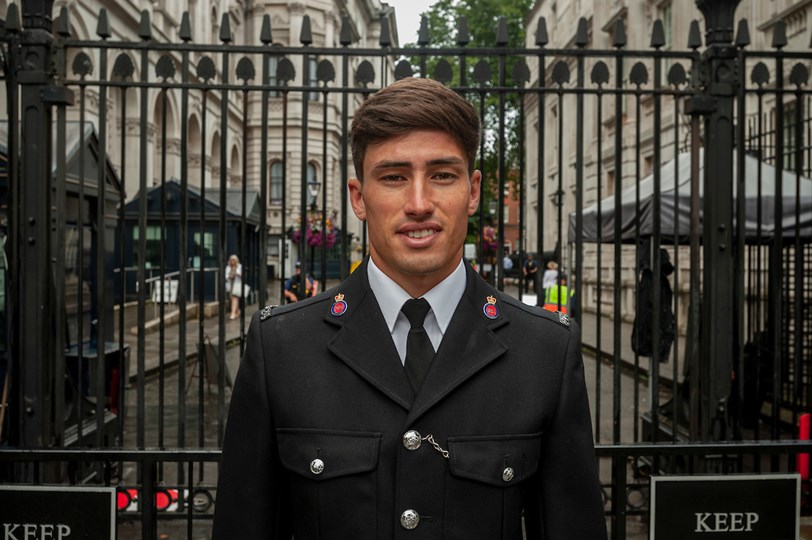 A Surrey Police officer who detained a knife carrying teen – stopping him attacking a family - has been at Downing Street as part of The National Police Bravery Awards.

PC George Bell said “I’ve been nominated for a Bravery Award. It feels brilliant to be in London today, I’m with my Grandad and we’re having a lovely afternoon out at Downing Street and I’m really excited to be here.”

PC Bell from the Reigate division was first on the scene after police had been alerted to reports of a teenager attempting to smash his way into a property in December 2017.

PC Bell was single crewed and on arrival could see the young man was extremely aggressive and was so agitated that he didn’t even realise the officer was there.

PC Bell couldn’t see a knife but suspected that the youngster had it tucked in his trousers, but despite the obvious risk, he put himself between the teenager and the property he was attacking.

People inside the property were by now reacting to the teen’s presence and the tension and aggression shown by both parties was increasing. So much so, they threw a pan of boiling water out the window aimed at the youngster and close to where PC Bell was stood.

PC Bell continued to keep calm despite the escalating tension and prevented the teen from gaining access to the property. When back up arrived seven minutes later, the suspect was arrested and it was confirmed that he did have a knife tucked into his waistband.

It transpired that the incident followed an ongoing dispute between two families concerning a Grievous Bodily Harm case which had caused real problems in the local community due to overt aggression and public order disturbances.

The 15-year-old pleaded guilty to causing criminal damage, witness intimidation, threats to kill, using violence to secure entry, possession of a class B drug and possession of an offensive weapon, and received a youth rehabilitation order with electronic monitoring and a six-month curfew. Additionally, he was given a three-month location ban from the area, victim charges and court costs.

Surrey Police Federation Chair Mel Warnes said PC Bell had displayed great professionalism in what had been a chaotic scene.

“PC Bell had to manage the situation, make fast time decisions and place himself in harm’s way to protect members of the public from an armed male. Without his intervention, there was a significant risk of injury coming to them.

“He showed a clear understanding of the National Decision Model and considered the danger that he put himself in along with the safety of others around him. All in all, he demonstrated exemplary police work, and we are very proud of how he calmly defused the situation.”

The awards are sponsored by Police Mutual.