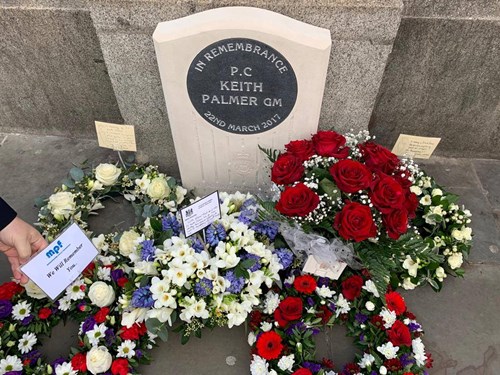 The Police Memorial to our heroic Metropolitan Police colleague PC Keith Palmer GM has been unveiled.

Family members and colleagues who worked with PC Palmer attended a ceremony held at 10 Downing Street and then outside Parliament where his Memorial Stone was unveiled.

PC Palmer was remembered throughout for his bravery and courage.

During the service, the Chair of the Police Memorial Trust, Geraldine Winner, described PC Palmer as “heroic” and that he will be remembered by the public for his service and sacrifice.

She added: “PC Palmer will not be forgotten. That is the reason we are all here today.”

PC Palmer was murdered during the Westminster terrorist attack on 22 March 2017 as he guarded the gates of Parliament.

The engraved stone has been laid outside the gates of Parliament, near to where PC Palmer fell. It was unveiled by Commissioner Cressida Dick who laid a wreath.

National Chair of the Police Federation of England and Wales John Apter, who attended the unveiling, said: “Today has been a deeply humbling experience and I am honoured to have been invited to attend this special event.

"The memorial, located a few feet from where Keith fell, is a fitting tribute and should serve as a reminder to all of the sacrifice he made that day.

“My thoughts and those of the whole police family are, as ever, with Keith’s family and colleagues; and I hope in some small way this memorial will bring them comfort, and reassurance that that he will never be forgotten.”

Metropolitan Police Federation Chairman Ken Marsh, who laid a wreath on behalf of his members, said: “This Memorial rightly recognises that PC Keith Palmer is a national hero.

“It is without doubt that Keith’s actions that day saved the lives of others, but unfortunately it was at the sacrifice of his own life.

“We are, and will always be, immensely proud of what Keith did that day.”

Prime Minister Theresa May also spoke during the service and described PC Palmer as a hero and praised his “selfless sacrifice”.