Between 2015 and 2017 more than 20 police officers a year took their own life. That’s almost two each month. Something needs to change.

Research has shown that emergency services workers are twice as likely as the public to identify problems at work as the main cause of their mental health problems, but they are also significantly less likely to seek help. This means they are dying because they aren’t asking for, or getting, help.

The Police Federation's Hear 'Man Up', Think 'Man Down' campaign encourages officers to take each others' mental wellbeing as seriously as they take each others' physical safety, and questions whether they are too dismissive of a colleague who may be showing signs of mental health issues.

The Samaritans have produced a guide to help people have conversations about mental health.

Here are some other organisations which may be able to help - simply click on the image to expand. 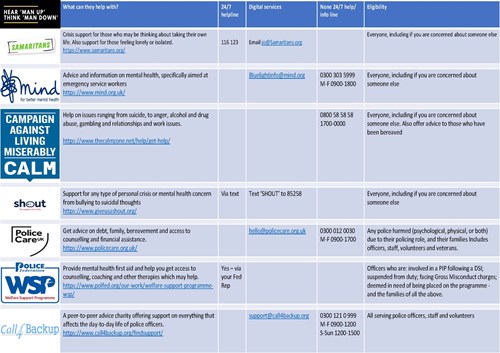 Watch and read more from the Federation's national wellbeing lead, Belinda Goodwin, about what prompted the new campaign.