‘The whole thing was an incredible experience’

A Derbyshire Police officer has described his experiences at the Police Bravery Awards as “surreal”.

Steve Fowkes and his wife Melanie enjoyed a tour of the Houses of Parliament, saw Boris Johnson and Sir Keir Starmer face off at an historic Prime Minister’s Questions - the first after the PM announced his resignation - and enjoyed drinks overlooking the Thames from the Palace of Westminster’s iconic Pugin Room.

The following day the couple joined fellow nominees and their guests from across the country for a special reception in 10 Downing Street followed by an inspirational awards ceremony at a central London hotel.

Reflecting on his experiences, Steve said: “The whole thing was an incredible experience. We went to the House of Commons and had tickets for Prime Minister’s Questions and obviously that was an amazing time to be there with front row seats.

“We then met our MPs Pauline Latham and Margaret Beckett in the Pugin Room as we literally sat and had a gin and tonic with our MPs sitting in a big bay window overlooking the river. It was very surreal.

“They are absolutely amazing women. They made us feel very at home and we had incredible conversations with them.

“We were there for ages and then they took us across to Portcullis House and showed us all the artwork there.” 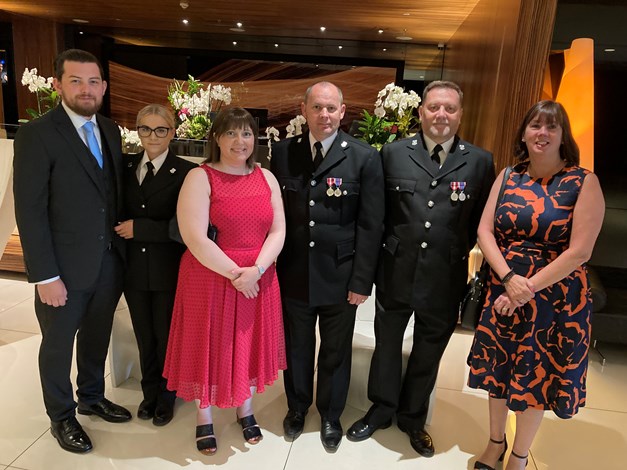 The following day Steve and Melanie and the other Derbyshire nominees, Steve Reid and his wife Rachel and Weronika Korbiel and her partner Jacob Callow, joined fellow officers from across England and Wales at a reception hosted by Home Secretary Priti Patel in Downing Street before heading to the presentation ceremony.

“There were some truly inspirational stories and it does bring a lump to your throat. It makes you proud to be a part of the police family,” said Steve.

Commenting on his own nomination, which he received for tackling a knifeman who had attacked and badly injured his colleague Steve Reid, he said: “I was surprised to be honest because to me I was only doing my job.

“I responded to a shout from my colleague and my friend Steve Reid. I knew he'd been hurt quite seriously and I was the first Taser officer there so I knew I had to deal with it.

“The suspect had to be dealt with because he was a risk to other officers and members of the public and if he was prepared to attack an officer with a knife what would he have been prepared to do to other people?

“So I put the excellent Taser training that we receive into practice and dealt robustly with this man.” 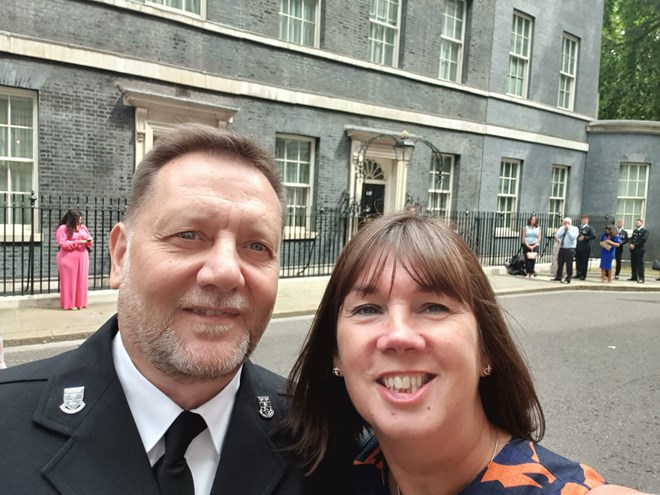 PC Steve Fowkes and his wife Melanie outside 10 Downing Street