A Derbyshire dog handler and his two four-legged crimefighting sidekicks have received a “highly commended” certificate at this year’s Thin Blue Paw Awards.

The Thin Blue Paw Foundation, a national charity that celebrates and supports working and retired police dogs across the UK, recognised PC Andy Bailey and his two dogs, Tilly and Riley, during their annual awards ceremony last month.

Tilly, a cash and drugs detection dog, has discovered thousands of pounds worth of drugs and cash, while Riley, a general purpose dog, has successfully helped locate a number of missing persons and detained many suspects.

“When I found out we had been nominated, I was genuinely humbled. I didn’t expect it at all. It brought a tear to my eye,” said Andy, who has been working in the police since 1992, and specifically with the Derbyshire team for nearly 25 years.

“When I saw the email addressed to me several weeks ago, I just thought it was another survey to complete. As I began to read into the text, I started to get quite emotional from the contents of what my supervisors, Lee Parkin and Donna Abbott, had written about me.

“But this award is for the dogs really, who never cease to amaze me. I’m just their chauffeur – it’s all them, they’re the real award-winners.

“They really do put the work in, they’re both incredible. The list of successes Tilly especially has is endless, her nose is still working like a vacuum.

“They’re as much your team as the people you work with are and you know they’ll always have your back.”

Andy, who is soon approaching his 30-years’ service in the Force, will be retiring next year, as will Tilly and Riley.

Tilly, an eight-year-old Labrador, was originally a Dog’s Trust rescue dog and Riley, a German Shepherd, is seven. Both currently live with Andy but following their retirement, Riley is set to be rehomed by a colleague.

“It’s been great that Tilly and Riley have been acknowledged for their work before they retire,” added Andy, who is looking forward to many enjoyable trips to the beach once retired.

Father-of-two Andy explained: “You’re not allowed to take Force dogs out, unless it’s for work purposes, so Tilly and I will be enjoying our retirement together.

“Plus, my eldest son has just joined the Met and he wants to be a dog handler too – so in some ways, I’m passing on the baton to him.” 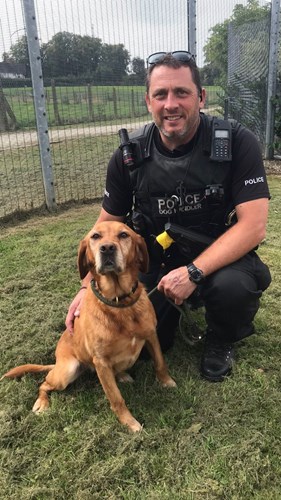