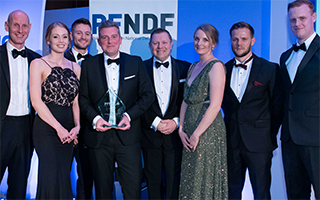 The team who worked on Operation Doubrava were presented with the Smarter Detective of the Year Award on Wednesday evening.

The team worked jointly with the State Police of Latvia on a large-scale conspiracy investigation into a Roma Latvian organised crime gang. The multi-agency investigation involved not only the Operation Doubrava team but also AP Phoenix, Europol, the Crown Prosecution Service, the National Crime Agency and Latvian authorities.

Despite the complex nature of the case, the Derbyshire team’s intensive work resulted in nine of the 11 defendants being sentenced to a total of 33 years with deportation orders to follow.

The PFNDF awards were held as part of a two-day seminar at the Hilton Birmingham Metropole on 9 and 10 October with the work of detectives across the country recognised by their peers.

Awards were also presented in the following categories: Detective Investigation of the Year; Services to Detectives; New Trainee Detective of the Year and the PFNDF Regional Recognition Award.