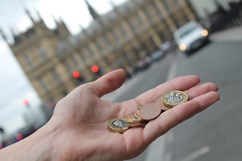 Phil Matthews, Chair of Wiltshire Police Federation, said: “Today, the Government appears to have accepted the recommendations of the PRRB for the first time to my memory. This can only be seen as a positive.

“However, the figure of £1,900 per officer no matter of rank or service is divisive. It is an insult to those with experience and rank, the decision makers in our organisation, those that shape the future of our new police officers and shape the way we fight crime are being penalised.

“To me, this is a ploy or tactic by the Government to seek support from our younger in service officers who will receive roughly 8%. This is still outside under inflation and does nothing to compensate the officers that have suffered freezes and well under inflation rise for 12 years.

“This is nothing short of a clever tactic to seek support and I urge our members not to fall for this. Our younger in service officers will see a noticeable increase. However the longer in service and higher in rank will barely notice this increase in the same insulting way than they have done for the last 12 years.

“Whilst this is a pay rise that is better than what has been seen for a decade, it is nowhere near enough to make any recompense for the years of cuts.

“Our Government continues to show contempt for our cops and fail to invest in policing. This is simply not good enough.”