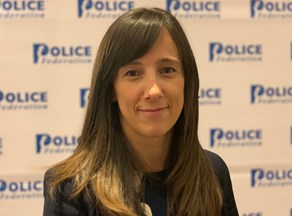 The Covid crisis has made the difficult job of being a detective even harder, investigators from Wiltshire have revealed.

Det Insp Tom Straker and Det Sgt Debbie Hatch, (pictured) from Wiltshire Police Federation, have been speaking out about the demands of the role to mark the Police Federation of England and Wales’s Detective Month Campaign.

Tom said: “Coronavirus has created general stress for everybody, one strain is that we’re not able to resolve some jobs at the moment because of the courts. We’re doing our job, yet the courts don’t seem to have adapted to Covid and we are getting backlogs, so we’ve got a lot of victims that are not seeing cases until months or even years later.

“Going to court is a very traumatic experience so if it’s going to take a year or longer, then victims might not want to go to court anymore.”

Debbie said: “Detecting has changed a lot in recent years, the demands have risen not just in the sense of more crime to solve but the demand of time. You have a 40+ hour a week, then you’re dealing with the expectations and demands of the Crown Prosecution Service.

“As well as; changes to case file building, helping Community Policing Teams, dealing with partner agencies, keeping the victim at the heart of everything and doing the best to deliver a gold service to get justice and closure for the victim. The impact of this demand has been inevitable, we have stressed out detectives who are trying their very best. In some cases, leading to long term sickness, mental health, early retirement and resignations.

“It’s a vicious circle that until we find a way to recruit and retain detectives unfortunately will continue.”

Tom said there was a financial penalty to becoming a detective, which has a negative effect on recruitment and retention. This includes the loss of allowances received as a response officer.

He added: “For the last ten years there’s been a real strain and most of us are much worse off than we would have been, due to losing money through not getting any clothing allowance.

However, the role is very rewarding, the investigators agreed. Tom added: “I love being a detective, it’s my passion. An advantage is being able to have time to deal with situations and getting finality or closure for victims.

“You deal with very serious offenses and help put that person in prison for a long time.”

Debbie added: “It is one of the best jobs, being able to solve crimes and help others. Also, the opportunities you have once you’ve got your Detective status is amazing, you can go on and specialise in other roles."