We are not the enemy

Piers Morgan is the well-known, often controversial figure on our TV screens. This week he was speaking on Good Morning Britain about the impact of the COVID-19 crisis and referred to a Tweet sent by PFEW's National Chair John Apter. In a series of Tweets, John said:

"Watching @piersmorgan talking about the impact of the #COVID19 virus. It’s devastating, the human impact is very real. Police officers are being portrayed by some as the villains during this pandemic. That’s insulting and so unfair. We are damned if we do and dammed if we don’t."
"Criticised by some for enforcing too much, others say it’s not enough. Phone cameras put in their faces when they try to speak with people. Assaults on police have increased during the pandemic. Weaponising the virus by spitting and coughing at police officers is sadly the norm."
"We know this isn’t easy on anybody, we are doing our best in the most difficult of circumstances. Like our colleagues in the NHS and other parts of the public sector my colleagues are exhausted, the pressure on them is relentless. This isn’t a moan, it’s just stating facts."
"Police officers are human beings doing an extraordinary job. We are not trying to spoil people’s fun or ruin Christmas, we’re trying to stop this deadly virus taking more lives. The vast majority of the public understand this and support us. We are not the enemy."

On the programme Piers Morgan supported John’s comments, and after reading out his Tweet, the TV host said: “I completely agree, I think the police have been put into an incredibly difficult position where they’re told to enforce it - they get the blame. If they don’t enforce it they get the blame. Whatever they do they get the blame.”
The National Chair said afterwards: “It’s good to see somebody like Piers Morgan recognise the impossible position my colleagues are in - we truly are damned if we do and damned if we don’t.
“I will always speak out for my colleagues and I stand by the tweets I put out. I would remind the public that police officers are doing their best to keep people safe. We are not the enemy.” 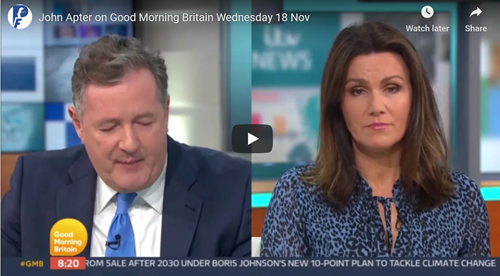