Data for 57 fire, police and ambulance services in England, Wales and Northern Ireland shows the number of staff who took time off due to mental ill health rose by a third between 2014 and 2018.

Workers have been urged to "seek help" after traumatic events.

The government said it was funding support for workers to "counter the stigma" around mental health.

Overall numbers of police officers and firefighters have fallen since 2014-15 but employment of ambulance workers has increased.

Fire and ambulance services reported an increase in the number of staff taking mental health-related absences - such as post traumatic stress disorder (PTSD), anxiety, depression and other stress - while police saw a slight drop in the last year after four years of rises.

Colm Porter from Unison said the rise may be down to staff being more willing to seek help with mental health.

Mr Porter said: "Demand on the ambulance service is at an unprecedented high as GP, mental health and social care services struggle due to chronic underfunding.

"It's obviously not good news that so many are suffering, but the rise in cases does show the taboo surrounding mental health is lifting, meaning we can begin to assess the real scale of the problem."

PC Jim Dutton, 37, a road traffic officer from Staffordshire Police, was driving in "torrential rain" on a motorway when two fellow officers in another vehicle slid off the road and crashed through a barrier.

One was trapped in the car and the other was thrown from it and down an embankment. Both were seriously injured during the incident in 2017.

"Even as a police officer, a traffic officer that has gone to many road traffic collisions and has seen some pretty horrific things over the years, nothing prepares you for seeing your own colleagues crash in the way that they did," PC Dutton said.

"But you have to kick into work mode, whether it's a member of the public or colleagues."

After presenting symptoms of PTSD and depression, he received treatment and stayed at a recovery centre.

He said there had been a "change in attitude" around talking about mental health but there was "a long way to go".

"I really cannot fault Staffordshire Police, they have been tremendous in the support right from the early days and that support is still there for me, should I ever need it.

"I want to show that it's OK to have something wrong with you and that there is a limit to everybody," he said.

"Don't be closed off to it, seek help, it's absolutely fine."

Figures released to the BBC under the Freedom of Information Act show:

A firefighter from Staffordshire, who asked to remain anonymous, said he developed PTSD after 30 years in the job and suffers from flashbacks and night terrors.

He said the rise in absences could be due to more officers coming forward about it, although many will not.

"I see it in younger firefighters at the start of their careers," he said. "There's help within the service, but they won't reach out for it.

"You think 'I'm okay, I don't need help, I am all right', but it takes more for people to ask for help - or even know they need help."

She said this was due to "repeated exposure to and the cumulative effects of trauma" combined with other stresses such as "long shifts and unsocial work hours". 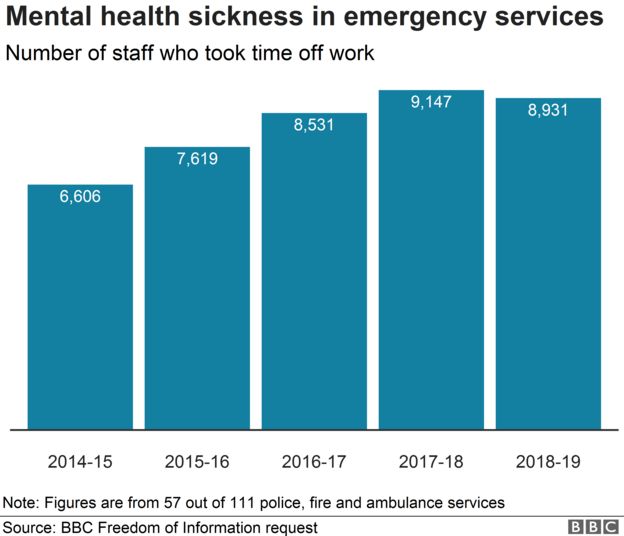 A force spokesman said it had tried to "reduce stigma" around mental health and encouraged officers to discuss issues.

East of England Ambulance Service said the number of staff off sick rose from 134 to 434 between 2014-15 and 2018-19 while London Fire Brigade had 263 firefighters take time off due to mental health, 99 more than five years ago.

Rachel Harrison, from the GMB union said nearly half of respondents to a staff survey had listed mental health as the main reason for low morale.

Matt Wrack, general secretary at the Fire Brigades Union (FBU) said the "stigma" around mental health meant the figures would only represent those who were comfortable disclosing their distress to their employers.

He said: "This might only be a fraction of those affected."

A Home Office spokeswoman said: "We have funded, and continue to invest in, a number of services and initiatives to support staff across all three emergency sectors.

"We are also working to counter the stigma around mental ill health and encourage those who may need it to seek help and support."

She said the government had invested £7.5m in a new National Police Wellbeing Service.

If you or someone you know is struggling with issues raised by this story, find support through BBC Action Line.