In 2015, Sgt Ronnie Lungu won a tribunal proving he had been racially harassed and passed over for promotion at Wiltshire Police. But he did not want to leave the force where he received that treatment, saying it was more important to be part of a group that brought change.

Sgt Lungu, one of only 16 officers from a black, Asian and minority ethnic (BAME) background in Wiltshire, now works full-time to increase diversity within the force.

He said: "In my lifetime if we can get the first black chief constable in Wiltshire, that would be success."

The tribunal ruled Wiltshire Police had unlawfully discriminated against Sgt Lungu. At the time he said he needed reassurance the force would take discrimination seriously in future.

"I felt vindicated, but the main thing really was to be acknowledged that something has happened, and hoping that change would come after that," he said.

"To me it was to make sure that they understand that something is wrong. Having said that, I felt I had to be part of that group to fix it.

Just as the ruling came out, the force restructured with new working practices in place and a new chief constable appointed.

Not only has he stayed with the force but in 2016, Sgt Lungu took over as the chair of the Wiltshire Black Police Officer Association (BPA) after a colleague retired.

With the new changes in place, he was allowed to work in this role full-time rather than fit it in with his traditional officer duties.

"Leadership decided I could do it full time which gives me enough time to come up with new ideas and innovations and ask the members what they want to see in their careers, building their confidence," he said.

"Now pretty much 85% of BAME (Black, Asian and Minority Ethnic) staff are members.

"We've got a BAME development programme, where they meet every month for three hours within work time where they can discuss anything, personal, organisational issues, and they can share experiences."

But only 16 officers at the force were from BAME backgrounds, 1.8% of the total, compared with the most recent census figures, from 2011, which revealed a 5.5% BAME population in the county.

However, since 2015, four BAME officers have been promoted to sergeant level in Wiltshire and the force said more BAME officers were taking the exams that paved the way for promotion.

The force said over the next two years, 5.3% of its cohort of recruits were BAME, which would improve diversity rates.

The Metropolitan Police is the country's most diverse force, with 14.2% of officers from Asian, black, mixed or other ethnic groups. However, the overall non-white population of London was 40.2% at the time of the most recent census.

Wiltshire is the 10th least diverse force in England or Wales - though there is not a huge difference between the top and bottom of that league table, and its figures are closer to the average for the area's population than several other forces' are.

But he said it was more important for all UK forces to deal with the issue of why people from BAME backgrounds did not want to join the police, rather than promotion rates.

He also said using the term BAME was "artificial" as there were differences between each ethnic group.

"If we just stick with black people for the moment, clearly there are reasons why black people historically may not want to join the service," Mr Munro said.

"They feel that even when they do join the service, they may be more likely to be dismissed from the same service.

"People go through some dire situations in terms of discrimination or disproportionately go through the disciplinary system.

"It remains that you're three times more likely to be sacked from the service if you are a black or Asian officer than if you're a white officer, which should not be the case."

Mr Munro said a third of the 43 forces in England and Wales had no black female officers - "an amazing statistic in this day and age" - while seven forces had no female Asian officers.

"When you look at the intersections between gender and race, the differences are even more stark," he said, adding the BPA believed positive discrimination could solve this.

"It's the only way to really get the figures up where they need to be. Nobody is talking about lowering standards or people coming through the back door," he said.

Away from the front line

Another strategy championed by Sgt Lungu has been to drive up diversity across the Wiltshire force - not just officers but support staff positions.

Mamata Raia is of Nepalese heritage and is an accountancy officer.

She said: "I used to think 'What are they going to think about me?'.

"Even before saying anything I used to think twice.

"When I walk to my work I feel like I'm the only one. If I look from outside I feel like there is nobody like me but with this support I don't feel isolated, scared or nervous anymore.

"I'm a different person now, in the way my confidence has built, I can see how scared and nervous I used to be four years ago.

"I want to keep moving up, I don't think there is a limit for me. After I feel like I have achieved everything in this role I'd like to move on... to the next step." 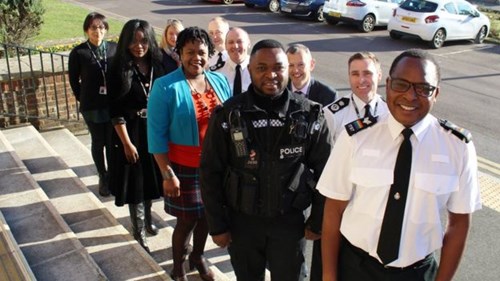 In Wiltshire, structural changes of the promotion process have altered interview panels to avoid penalising people "who could not perform on the day" or favouring "the popular one".

"We've now got a resource management panel where people are openly discussed by a panel and they don't even come in, so if there's any aspect of unconscious bias that can be challenged," said Sgt Lungu.

"If any views are put forward they have to got to be evidence-based."

A reverse mentoring scheme was also introduced in January.

Senior officers are partnered with BAME officers for 12 months to meet on a regular basis to gain an insight into particular issues such as racism or cultural difference officers and staff experience.

Deputy Chief Constable Paul Mills, the force's lead on diversity, equality and inclusion, is going through the scheme.

"It's making sure there's an environment where both of us can get the very best of that interaction and make sure it's a comfortable one," he said.

"What you do in terms of your day job, to a certain extent, should be left at the door, because that's the best way you can get the best out of it."

PC Karoline Maia, from Brazil, has served at Wiltshire Police for five years.

"I'm happy with what I'm doing, although my future goal is to take my sergeants' exam and see if I can progress that way," she said.

"If I was to compare it with my previous force, we never even had a BAME group and sit down and have a chat about our career aspirations.

"It gives us an outlook of where we could go in the future. To know there are plans in place to go up the ranks should we want to, I feel very supported."

The Wiltshire BPA also holds monthly meetings, which is regularly attended by 20 or so of its members.

Sgt Ho Tsang moved to Swindon from Hong Kong when he was nine.

He passed his sergeant's exam with flying colours in 2007, ranked 23rd across the UK in a test that only 35% of entrants usually pass, but said he had been disillusioned since.

My confidence did definitely go down and I was on the verge of leaving the job until Ronnie and the mentoring meetings, and they saw how upset I was," he said.

"It was good because for him to pick that up and really want me to open up to them helped me in terms of staying in this job, working in the police and getting promoted.

"Ronnie has done such a great job, and the BAME group, in terms of getting my confidence up and telling me 'You are good enough, you've worked this hard, you've proved yourself'."

While Sgt Lungu's hope is to see a black chief constable appointed in Wiltshire, concerns remain over glass ceilings.

Sgt Lungu said: "The fact that we can all refer back to a guy called Mike Fuller, who is a chief constable in Kent who retired almost 10 years ago and has had two careers since then, remains a concern.

"So some of the changes that we hoped we would see after the Macpherson report really have stalled, or in some cases have gone backward.

"If people join, they want to progress and do the best they can.

"Talented people, regardless of skin colour, find their progress has stalled. You have to say there remains a problem."

The view from outside

In Swindon, there is an established Indian Hindu community of between 6,000 and 10,000 people.

Chairman of the Swindon Hindu Temple, Pradeep Bhardwaj, said although relations with the police were positive it was disappointing the town did not have any Indian or Hindu officers he knew of.

"On many occasions I have, in the past two years, invited Wiltshire Police to come to the temple and organise day events to provide information about what the job is all about, what it brings, what the requirements are, what the rewards are," he said.

"People have to be familiar with what it involves and that is the starting point for people to consider joining and also to give information about what the vacancies are and how to apply.

"It's a combination of things. People may not be aware as to what the different roles could be, not just the remuneration but the skill sets needed.

"There are a lot of back office roles, a lot of call centre roles, and as Hindus have excelled around the world in this, it's a huge surprise we do not have a single Hindu working there."

His efforts to organise such events have yet to be followed up by the police.

And for BAME officers this works two ways - by having to deal with racism from predominantly white towns.

"While I was in Chippenham, the times I was racially abused was disproportionately high - it was a shock to me.

"I think people are using Brexit as an excuse to be racist more times and to be more outspoken, whether they mean it to be racist or they're saying it because everyone else is saying it and felt it was more acceptable now.

"There's no doubt that people know what racism is, and racism is wrong, but they still choose to use those words and, especially in this climate, do they feel they can be more intolerant of other races? It's difficult to say."

As for Mr Bhardwaj, he believes while Indians are represented in many areas of public life such as the NHS, it was also important for policing to have ethnic representation.

"The police are a bridge between the public and law and order in general, so police officers have to be culturally aware of the cultural sensitivities of Hindus and Indians," he said.

"It's a different thing altogether to learn about these sensitivities through indirect channels, like courses. It's different to have people working for you who know these cultural sensitivities first hand.

"That is the reason we encourage diversity not just in the workplace but everywhere.

"It's important also not to just learn the cultural differences and sensitivities but also improve the goodwill and relations with the community."