Government has shown ‘true disdain’ for our brave hero cops 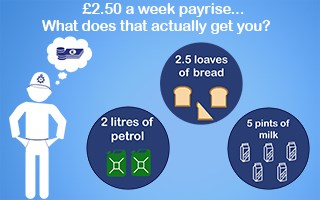 As yet another ‘derisory’ 2% pay offer is handed down, the Police Federation of England and Wales (PFEW) has slammed the contempt shown for officers putting their lives on the line.

On the same day that a bill to protect officers against vicious assaults was due to progress through Parliament, it was also revealed that:

PFEW Vice-Chair Ché Donald said: “Today’s derisory announcement flies in the face of a lot of hot air spouted by the Home Office and Government over the past few months.

“Less than two weeks ago the Home Secretary was proudly pleased to hand Bravery Awards to two officers who took on the London Bridge terrorists. At our conference in May, he said he would stick up for officers and fight for a better deal. We warned then he was on probation.

“But now this is looking more and more like paying lip service, when in reality this pay award is an insult to those who serve day in, day out. It means that an officer at the start of their service is going to be a miserly £2.50 better off each week.

“No wonder a growing number of officers are leaving the service. In the past four years there has been an increase of more than 30% of voluntary resignations – nearly 2,000 last year alone - we are literally haemorrhaging officers and much of it has to do with the fact they simply can’t afford to stay in the job.”

Mr Donald criticised the fact that the Government had ignored the recommendations of the PRRB (an independent group which advises the government on police pay) for the second year running.

“The Government must honour the PRRB process which is based on evidence – we asked for 3.4% so that officers could be paid fairly for the dangerous job they do after years of austerity. The PRRB recommended a total of 3%.

“We have played ball – we submit evidence to the pay review body, yet Government dismisses their recommendation. In the coming weeks we will be consulting with our local Federation colleagues to determine the next steps to take.

“The Assaults Bill, due to have its second reading today in the House of Lords, recognises that danger, and that some officers sadly pay the ultimate sacrifice. Why can’t the Government honour officers’ commitment to keep the public safe with a decent pay packet for a change? We’re not asking for the earth, we’re just asking for fairness.”

The pay settlement also announces the introduction of a new apprenticeship starting wage of £18,000 per year – nearly £2,000 less than the yearly salary of a probationer constable.

Mr Donald added: “This amount totally undermines what the police service sets out to do. It is derisory and proves they don't invest in their people or want to invest in the development of the service.

“Police officers used to feel valued and appreciated, but when government ignores the recommendation of its own independent pay review body, then police officers feel demoralised, fed up, unappreciated and undervalued. And that is not a good place for policing. Fewer people dealing with more calls; yet in the Government’s eyes they are only worth a real term pay cut. Police officers go above and beyond what is expected of them day in day out – and I know that today’s news is making many officers ask themselves why.”

* The so-called 2% rise will actually leave officers financially worse off (when inflation is accounted for) and is worth only an 0.85% increase in real terms. The 0.85% figure is derived from the fact that of last year’s 2%, only 1% was consolidated. That 1% has now been removed by the Government for this year’s pay award, so taking into  account pension contributions, then the  actual uplift is worth approximately 0.85% to Constables. The increase will be paid from September 2018.