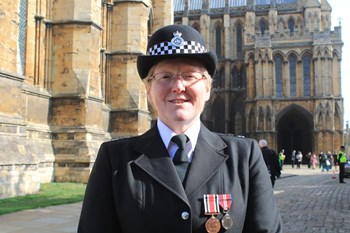 Wiltshire Police Federation has joined the wider police family in honouring the thousands of officers who have died on police duty.

The annual event honours more than 5,000 officers who have lost their lives on duty. It was the first time the police family had gathered together for National Police Memorial Day since the COVID-19 pandemic.

Sarah said the event was so important to ensure fallen colleagues from across the UK were not forgotten.

“We must remember them,” she said. “We don’t wear an armed services uniform, but we are still out there serving and protecting the public, so we need to honour those officers and staff who gave their lives for the job.

“It’s a privilege to be here and represent the Federation and Wiltshire Police officers and staff, and it’s good to have representatives from every force here to remember fallen colleagues and to share stories and experiences.”

The names of those officers who had died in the past year were read out during the moving service.

HRH The Prince of Wales, who is patron of NPMD, said the country was ‘forever grateful for the steadfast dedication to duty of our police officers who have adapted and worked so tirelessly amidst the ever-changing circumstances’ of the COVID-19 pandemic.

Writing in the commemorative brochure, Prince Charles said: “We owe a most profound debt of gratitude to our police service and its remarkable officers, who, along with their families, will continue to have a very special place in the heart of our nation.”

Representing Wales was Rhianydd Gardiner, great-niece of PC Noel Alexander, who died in 1964 because of injuries sustained in a training incident.

“Today, we pay tribute to the courage of those killed in service, and the great courage showed by their families ever since.