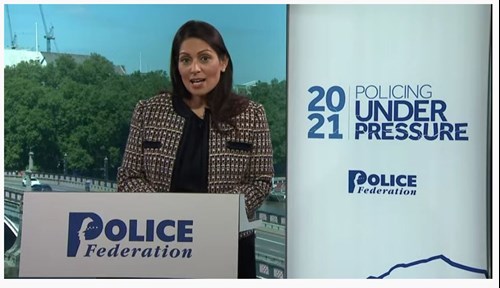 The Home Secretary was grilled on vaccines priority, driver training and police pay at the Police Federation of England and Wales’ annual conference earlier today (9 June).

Officers told Priti Patel that they felt let down when they weren’t given vaccine priority and that the Government had treated them with contempt. John Apter, Police Federation Chair, told the Home Secretary that he had been “inundated” with messages from his members who felt vulnerable at work without the jab.

Ms Patel replied: “It is not about letting people down. We have to remember that people were dying and we had terrible death rates. The elderly and vulnerable were in desperate need. The Joint Committee on Vaccines and Immunisation (JCVI) had to prioritise accordingly. Hospital admissions were terrible. I was arguing passionately for officers. [But] Independent committees have to make life and death decisions.

“Officers are receiving the vaccine [now] and many forces have bespoke arrangements with NHS trusts and those trusts have been working in really constructive way.”

Driver training was addressed by Tim Rogers, Pursuits Driving Lead for the Police Federation of England and Wales, who said that officers could still be at risk from prosecution, despite proposed changes to the legislation.

He told the Home Secretary: “The proposed remedy in the Police Crime and Sentencing Bill could put officers at risk of being charged with a criminal offence when they have been deemed to breached policy and procedure. This is not right…Officers when acting instinctively to protect the public may well drive in the way that they have not been trained. Can you reassure us this flaw will be remedied?”

Ms Patel replied: “I back officers in terms of doing their job. That is vital. We want to make sure we are not inadvertently having the wrong impact on officers and their careers…It is not our intention to lead to criminalisation. And of course the bill is going through parliament so it is going through scrutiny.

“By making these changes we want to do the right thing. What I don’t want is the perverse consequences. We will absolutely work together with you on this.”

She was also asked if she would give officers a post-pandemic pay rise, after she was effusive in her thanks of officers for their hard work during Covid.

Ms Patel said: “The overarching message is of enormous thanks and gratitude for the service officers have given. We have all experienced some terrible things but policing has been front and centre. It has been heroic and I want to give my thanks to everybody who has been out that because they have helped to save lives.

“Policing has helped to stop the spread of the virus. I want to back police officers in doing that and give all officers the support they need to empower them to get on and do their job.”

The Home Secretary replied: “Well. There are pay reviews, bodies, commissions around all of that. But as a Government we are committed to ensuring the lowest paid get a pay rise