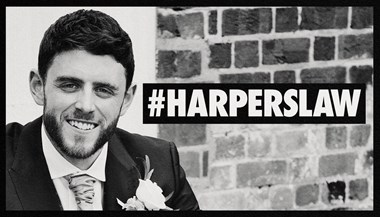 The Government has announced that mandatory life sentences for those who kill an emergency worker in the course of their duty will be enacted, following 16 months of lobbying by Andrew Harper’s widow, Lissie.

The change to the law will be made “as soon as possible”, the Government said,

The move extends mandatory life sentences to anyone who commits the manslaughter of an emergency worker on duty – including police, prison officers, firefighters and paramedics – while carrying out another crime unless there are truly exceptional circumstances. Courts must already impose life sentences for murder, with a whole-life order being the starting point if the victim is a police officer.

Mark told James Thomas on BBC Radio Wiltshire: “This is excellent work by Lissie. She went through a terrible time with the loss of her husband in this terrible incident and she has fought tirelessly to have this law in Andrew’s name.

“It brings that extra protection that we as emergency workers need. We put ourselves in harm’s way and all we’ve ever asked for is that the people who look after us - that’s the courts - recognise the sacrifices we’ve made and when we make the ultimate sacrifice, as Andrew did, that the penalty matches the crime.”

Around two officers are attacked every week Wiltshire, Mark said. “That is from being spat at, which is bad enough as it is, to being kicked and punched.”

Mark attended PC Harper’s funeral in October 2019 on behalf of Wiltshire Police Federation. He added: “To see the heartbreak that Lissie and the family were going through and the tears of the many people who were in attendance - to have anything that prevents or discourages people from assaulting emergency workers when they are committing crime can only be the right thing.

“I think this will make people think twice.”

Deputy Prime Minister, Lord Chancellor and Secretary of State for Justice, Dominic Raab said yesterday: “We are going to pass into law mandatory life sentences for those who unlawfully kill an emergency worker in the course of their duty. I pay tribute to Lissie Harper’s remarkable campaign.

“This government is on the side of victims and their families and we want our emergency services to know that we’ll always have their back.”