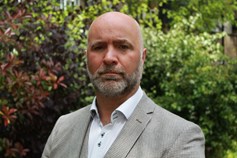 The Government’s treatment of courageous police officers – who were denied any level of priority for the Covid-19 vaccine and have now been snubbed for a 2021 pay rise – is a national scandal.

That’s the view of Mark Andrews, Chairman of Wiltshire Police Federation, who said “the latest kick in the teeth of a zero pay increase for the majority of officers demonstrates the true level of disregard we are held in by Government.”

Mark, who represents more than 1,000 police officers in Wiltshire, has said officers are “tired of being treated unfairly and with a lack of respect” by this Government.

He said: “The treatment of police officers over the past 18 months of the Covid-19 pandemic by a Government that promised to back us and support us is nothing short of a national scandal being played out in plain sight.

“It doesn’t matter to the Home Secretary, Chancellor or Prime Minister that we have kept the wheel on the nation ensuring their confusing and numerous Covid legislative changes have been complied with. At great risk to ourselves and our families.

“It doesn’t seem to matter to them that police officers have continued to put ourselves in harm’s way since the start of the pandemic, sometimes with limited and ineffective PPE. They could not care less that we have been assaulted, vilified in the press and had Covid used as a weapon against us by those who would do us harm.

“We have continued to Police, to put on our uniform every day, despite all of this and all we have asked for is to be treated fairly. A sense of fair play appears to be sadly lacking in our decision makers.”

Mark added: “Police officers have given everything over the past 18 months and yet again the Government has given us nothing.

“We hear all the time how they are supporting us “in other ways” but all we see is rehashing of old ideas, or relabelling things we are already doing, whilst they jump up and down about giving us an additional 20, 000 police officers.

“The public and the police have not forgotten it was this Government that cut similar numbers, no matter how it is spun.

“Morale amongst police officers across the country is at an all-time low, and lower than I have ever experienced in Wiltshire. I hear daily from officers in Wiltshire how tired they are of continually having their rest days cancelled, leave embargos put in place and shifts changed at short notice.

“They are becoming both physically and mentally ill trying to hold the line with reduced resources and lack of foresight. Some of those experienced officers have had enough and are now considering if it is time to hand up their uniform for good.

“The one thing our officers don’t want to do is to let the public down. They joined to serve and have only ever asked to be given what they need to do it properly.

“I worry in Wiltshire we will end up letting the public down by not being able to do the basics of policing and I am working with Chief Constable and other senior leaders to ensure the lack of resources on the front line does not put officers and the public at risk.”

Mark concluded: “Police officers are not greedy. We just want fair treatment, consideration of our welfare and the resources and equipment we need to do our jobs.”