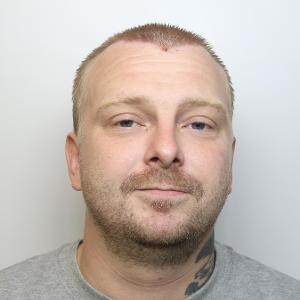 A man who fired shots at police in a two-hour siege making them "fear for their lives" has been jailed.

Scott Symmonds, 31, smashed an upstairs window in a house in Swindon in August and took aim at the officers.

An imitation AK47 assault rifle, a decommissioned Uzi sub-machine gun and blank firing pistols were later found at the home in Darling Close.

Symmonds, of Latton Close, was jailed at Swindon Crown Court for four years and nine months.

He had previously admitted charges of making use of or attempting to make use of an imitation firearm with intent to resist arrest.

Mark Andrews, Chairman of Wiltshire Police Federation, said: “I’m so proud of our officers. This incident highlights the risks we can face by attending what appears, at the outset, a simple job. Their bravery shows why our police service is admired throughout the world”

Officers were called to Symmonds' home in Darling Close at around 7.30pm on 28 August due to an ongoing domestic disorder.

The two police officers who initially responded to the 999 call entered the property through the open back door, but were very quickly confronted by Symmonds pointing a firearm.

The pair, who were unarmed but were carrying Tasers, swiftly withdrew from the address and took cover in the street outside.

Symmonds, who remained inside the house, smashed an upstairs window and proceeded to fire shots at police officers outside.

Armed police then arrived at the scene and used a baton gun, which fires projectiles, to disarm him.

Officers then successfully negotiated with him, resulting in Symmonds discarding his weapons and peacefully leaving the house at around 9.30pm, when he was arrested.

Police seized a number of weapons from the house - an imitation AK47 assault rifle, a decommissioned Uzi sub-machine gun, a blank firing pistol - which were all used during the incident.

There were also two other blank firing pistols in the property.

Det Insp Paul Hacker, from Swindon CID, said: "This was an incredibly frightening incident for the police officers who attended. They genuinely felt in fear for their lives and believed they were being shot at by live rounds.

"Although the subsequent investigation has clarified that Symmonds did not have live firearms, they were very realistic replicas and were used with the aim of convincing police that they were under threat.

"During his police interviews, Symmonds revealed that his ultimate aim was to be shot by armed officers, and it is great credit to those that attended on the night that the incident was resolved peacefully and safely, without anyone being injured."