In a little over three weeks’ time, a trio of intrepid West Midlands Police fund-raisers will embark on a sponsored cycle ride covering more than 200 miles to raise money for a charity that offers vital support to the families of fallen police officers.

The three cyclists – Chief Constable Dave Thompson, West Midlands Police Federation chair Rich Cooke and Force academic researcher Gill Wall – are part of the West Midlands Chapter of the Police Unity Tour (PUT), an annual sponsored cycle ride in aid of Care of Police Survivors (COPS) supported by officers, staff and family members representing police forces across England and Wales. They are hoping colleagues will get behind their fund-raising efforts.

Mr Thompson said: “COPS is a charity dedicated to those left behind after a loved one has been lost in policing. Each year as a service we mark this event at the National Memorial Arboretum in Staffordshire. A growing feature of this is the Police Unity Tour.

“This year I am joining Gill, who is a veteran of the tour, and Richard Cooke, our Federation chair, on this ride to raise money and promote the West Midlands Chapter in our Force so more can join in. I look forward to slogging up a hill for a good cause while Richard talks to me about Taser. You have got to fund us for the sheer pleasure of imagining this!”

Rich commented: “I know people get lots of requests to donate to good causes nowadays but if you are part of the police family, or simply value the service, you may know of the COPS charity and the vital work it does supporting those left behind. It’s a sad thought but this could be any of our families.

“Every little donated is genuinely appreciated so if you can help us in any way, if only by sharing the link to our fund-raising page, we are extremely grateful.”

The various chapters of the PUT will set off from points around England and Wales on Friday 26 July coming together in Staffordshire to then ride into the National Memorial Arboretum in Alrewas for the COPS memorial service on Sunday 28 July. 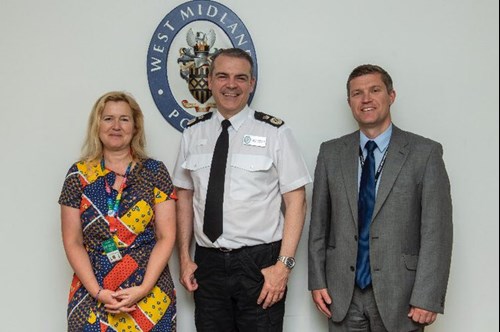 COPS is a UK registered charity dedicated to helping the families of police officers who have lost their lives on duty. It aims to ensure survivors have all the help they need to cope with such a tragedy and that they remain part of the police family as they rebuild their lives.

COPS is independent of the police service and was founded in March 2003 by Jim McNulty and Christine Fulton (MBE). Jim was a retired police officer from Strathclyde Police. Christine is the widow of PC Lewis Fulton who was murdered on duty in Glasgow in 1994.

Each year, usually in July, COPS holds a survivor weekend incorporating social activities and concluding with a service of remembrance.

The COPS service of remembrance is held on the Sunday morning of the survivor weekend at the National Memorial Arboretum. It is attended by representatives of the UK police service, staff associations and the wider police family. All are welcome.

This year’s survivor weekend runs from 26 to 28 July.