Two West Midlands officers who were still in training when they confronted a group of men armed with knives have been nominated for the national Police Bravery Awards.

PCs Lorna Walsh and Adam McWalter were still student officers, when on 15 June 2018, they were left fearing for their own safety.

The two officers were put forward for the prestigious awards by West Midlands Police Federation.
Federation chair Rich Cooke said: “These two brave officers may be relatively young in service but both showed they have the qualities and skills of great police officers. They acted in the finest traditions of policing, seeking to protect the public from danger despite putting themselves at risk of injury or worse.

“They should be very proud of themselves and I am pleased their actions will be recognised at the bravery awards which are one of the most important events in the policing year.”

The pair had volunteered to change their shifts and take part in a plain clothes operation tackling prostitution when on Ninevah Road they came across a group of 20 men - one of whom was holding a knife with an eight-inch blade to the stomach of another.

The officers got out of their vehicle, identified themselves as police officers and told the man to put down the knife. They drew their batons and spray but the man with the knife started to run towards PC McWalter with the knife held out in front of him in a threatening manner, before discarding it over a wall.

Unaware if he had any other weapons, PC McWalter chased after him when a second man pulled a large knife out of his waistband and, holding it in the air, ran towards PC Walsh. PC Walsh shouted at the man to put the knife down but he ran off, following her colleague and shouting: “Police won’t get you brother.”

PC Walsh, fearing for her colleague’s safety, screamed to warn him of the threat from behind. PC McWalter activated his emergency button and managed to keep both men in sight, even though the second offender ran at him with the knife. Colleagues with Taser arrived on the scene quickly and both men were red dotted and subsequently arrested.
This year’s awards ceremony takes place on 18 July in London. PC Walsh will take her fiancé, Tony, as her special guest while PC McWalter will be accompanied by his wife, Amanda.

The bravery awards honour some of the finest officers in England and Wales who have performed incredible acts of bravery, while on or off duty. The event is now in its 24th year. 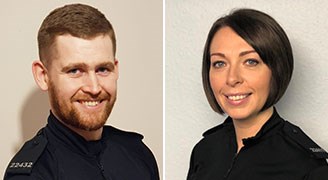