The donation follows a social media appeal by the hospice.

“All credit to these officers for doing their bit to support such a worthwhile cause,” says Jon Nott, chair of West Midlands Police Federation, “At a time when officers are in the front-line in serving and protecting their communities during the current crisis it is heart-warming that they are also supporting care staff who remain committed to providing end of life care at the hospice.”

Where possible, members of the Central Motorway Police Group (CMPG) team take part in ‘dress-down Friday’ for a £1 contribution to a chosen charity.

After seeing the request for help from the hospice, officers counted up their ‘dress down’ contributions and contacted local cleaning company JK Cleaning Supplies which supplied them with 3,000 gloves and 1,000 aprons, as well as donating an extra 1,000 aprons. All the items have now been delivered to the hospice.

The officers had previously donated money to the hospice after it cared for PC Carrie-Ann Lowe’s mother in 2017. 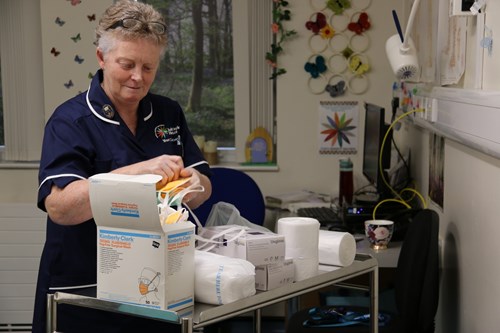