When PC Paul (Jock) Williamson invested £50 of his own money in setting up a tuck shop at Summerfield Police Station he was simply trying to help out his colleagues.

But, by providing a range of chocolate, crisps, healthy snacks, porridge and Pot Noodles, he also managed to generate a small profit and has now used this to buy gloves, masks and liquid soap for staff at the Albion Care Home on his Winson Green patch.

“I visited the home while on duty and was really touched to see a lady visiting her Dad who was having to speak to him through a closed sliding door,” says Paul. “I just wanted to do something to help the staff, residents and families.”

Paul contacted Banner UK to buy the items to donate to the home and the company’s manager, Eric Mountain, offered to donate four boxes of masks free of charge. This allowed Paul to use his tuck shop funds to buy extra gloves and the soap.

The Albion Care Home team were delighted with the donation and thanked Paul and PCSO Sophie Stevens when they dropped in with the equipment.

With 18 years’ service under his belt, Paul – who has been given the nickname ‘Scottish’ by some members of the public - says he is enjoying his role as much as ever despite the coronavirus crisis.

“We have been getting out into the community on bikes, talking to members of the public, helping educate them to the risks and advising them on the Government’s guidelines,” he explains.

“We have been getting a really positive reaction. We may find someone having a picnic in a park or trying to use gym apparatus in a park but once we explain to them why they shouldn’t be doing that we are not having any problems. People seem to understand that we are just doing our job and trying to keep everyone safe.”

The Winson Green Neighbourhood Team is made up of a sergeant, three PCs and two PCSOs. 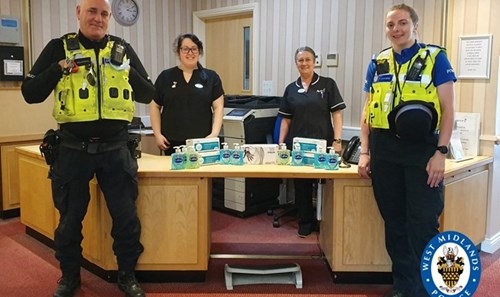