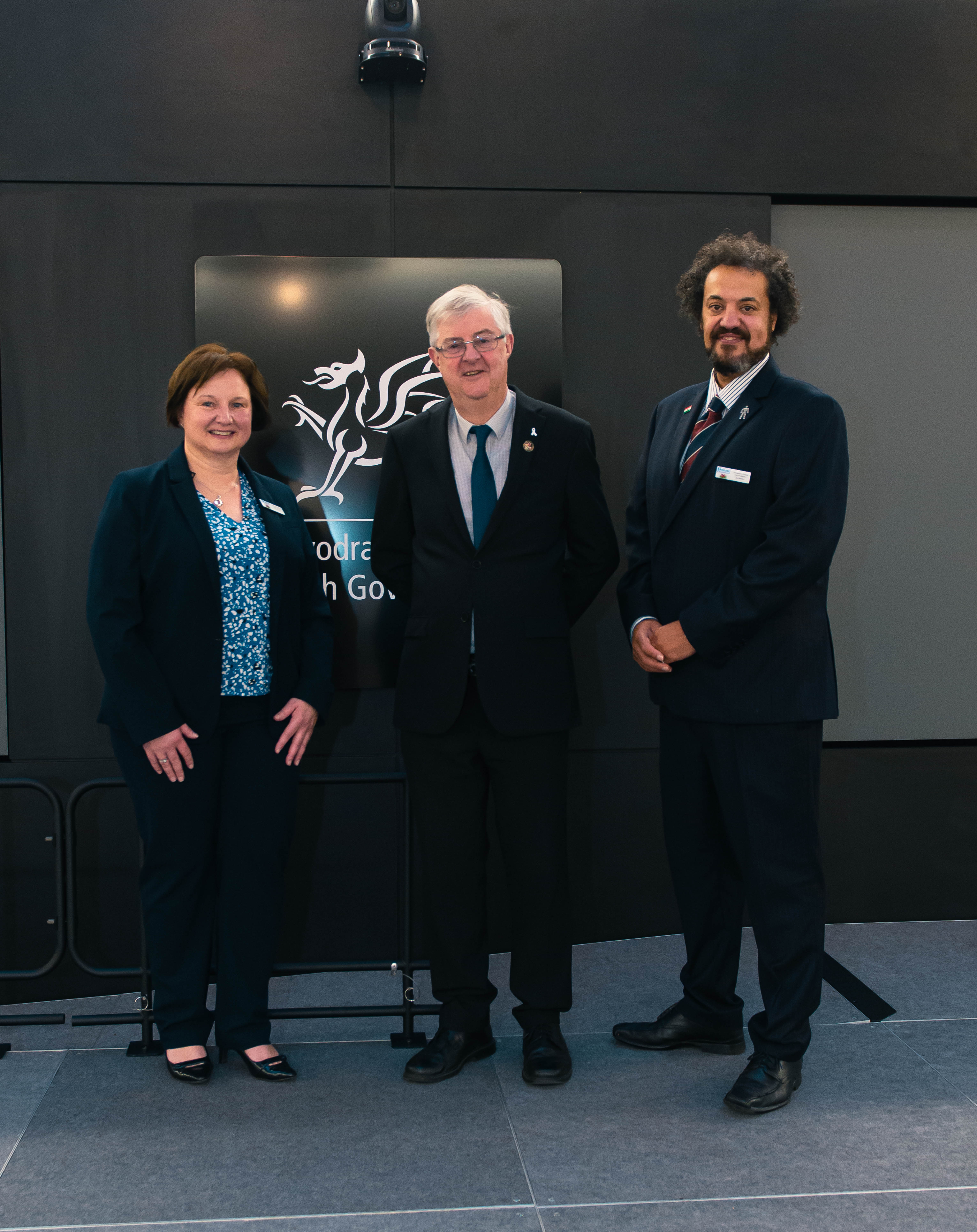 Police Federation national chair Steve Hartshorn, Welsh affairs lead Nicky Ryan and National Board member for the Welsh region Zac Mader were also at the reception at Cathays Park 1 which is the Welsh Government building in the city centre.

Nicky said: “It was a fantastic event and I am so pleased the First Minister took time to meet and speak to the brave officers who give so much to their communities.

“It is important that policing feels it has the support of the Welsh Government and events like this show the unique and vital role our members play in Welsh society is recognised by our elected leaders.”

Nicky praised the six Welsh officers who were shortlisted for the national Police Bravery Awards.

She said: “We are extremely proud of the officers from the Welsh forces who were nominated for Police Bravery Awards this year.

“Each of them has shown incredible courage in very difficult circumstances and although they have all played down the parts they played, they are fully deserving of this recognition from the Welsh Government.

“During the reception, the ministers took a real interest in the effects the incidents for which the officers were nominated for the awards had upon them as individuals and how they were subsequently supported.”

The winner of the regional award for Wales this year was PC Nathan Davies from South Wales Police.  He was called out late at night in a raging storm back in August 2020 when reports came in of a woman screaming for help in the River Clydach in Swansea.

The trained public order medic made his way down the river bed in treacherous conditions but fell and knocked himself unconscious. After coming round, he crawled on his hands and knees to two casualties and began performing CPR on one of them until back-up arrived about 10 minutes later.

PC Davies was presented with his bravery award by Ms Blythyn at a ceremony in London in July.

After the reception, he said: “It was an absolute honour to meet the First Minister and certainly a proud day for me and my family. I’m sure this will be a ‘career highlight’. It was wonderful to see all the other nominees again and get a chance to hear their stories from them as I hadn’t heard them before.

“From the time I was nominated for this award, the treatment from the Federation has been fantastic and far more than I would ever had expected.”

Dyfed Powys Police had three nominees this year. PCs Lucy Morris, Nikita Matthews and Paige Morgan showed quick-thinking as well as bravery when they responded to reports of a man with mental health issues making  threats and “messing with petrol”.

When the three officers arrived at the scene - a house in Llandrindod Wells - the man pointed an air rifle at them and forced them to back off.

Members of the public were in the area and the three officers were doing their best to keep them back but the man then began to walk towards the centre of the town.

The three PCs took the decision to use their police vehicle to control the man and carried out their manoeuvre in as safe a way as possible so the suspect sustained only a minor leg injury as a result.

Gwent Police Sergeant Menna Watkins was nominated after she subdued and arrested a knife-wielding thug.

Sergeant Watkins was responding to reports of a disturbance during which the suspect had threatened a man with a knife. She spoke to the alleged victim at the scene and was trying to get more information about the suspect when he charged through the crowd of onlookers and lunged towards her.

She deployed her Taser as he ran towards her and then handcuffed him and waited for back-up to arrive at the scene.

North Wales Police nominee PC Clare Larkey-Jones was off-duty when she put her own safety at risk by stepping into the middle of a street brawl, preventing serious injury to the victim and what could have erupted into large-scale public disorder.

She saw an individual violently punching another man, pulling him to the floor and repeatedly kicking him in Caernarfon town centre.

With no protective equipment, PC Larkey-Jones intervened and put herself in the middle of a group of men to diffuse the situation and protect members of the public from becoming embroiled.

Along with nominees from forces across England and Wales, the Welsh officers attended a Downing Street reception hosted by the then Home Secretary Priti Patel before an evening awards ceremony.

The Police Bravery Awards are organised by the Police Federation of England and Wales.