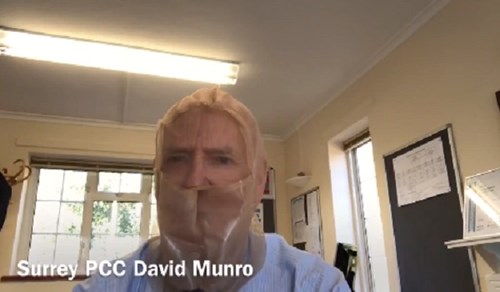 Surrey’s Police and Crime Commissioner David Munro has filmed himself wearing a spit guard to show his support for their roll out to officers, Police Professional reports.

In a one-minute video posted on Twitter, Mr Munro said: “There’s been some recent articles in the media about the use of spit and bite guards and that’s what I’m wearing now. Some say they are degrading and inhumane, but I don’t agree with them. I can see, I can hear, I can breathe. What I can’t do is spit or bite someone.”

He added: “It’s got to be properly regulated, of course, and police have to be accountable for their use, but these procedures are certainly in place in Surrey Police. I thoroughly support their use.”

Police Professional reports that the video has been criticised by some who said wearing a spit hood while sitting in an office alone did not reflect the way such items are used in the real world.

Mr Munro made his film just days after campaigners at the advocacy group Liberty criticised the Metropolitan Police Service (MPS) for joining the growing number of forces rolling out spit hoods to officers on the street, claiming that justifications for their use “do not stand up to scrutiny”.

She said: “Let’s be clear, nobody deserves to be assaulted as they do their job and being spat at is plainly unpleasant.

But police forces routinely rely on the risk to officer’s health –contracting HIV, hepatitis or tuberculosis (TB) – to sustain calls for a roll-out of spit hoods. These risks have been substantially overblown.

“Neither HIV nor hepatitis C can be transmitted through spit. The minimal risk of hepatitis B transmission can be vaccinated against – which is already done for other professionals who face a risk of being exposure at work, such as nurses, doctors and dentists. And the UK benefits from a public vaccination programme against TB.

“It is a tactic that is at best misinformed and at worst profoundly stigmatising – preying on prejudice to strengthen a weak case. Police concerns and the dignity of those they serve can be reconciled with proportionate measures that don’t hollow out the principle of policing by consent.”

In 2017, Avon and Somerset Constabulary issued an apology after announcing it would be introducing spit hoods for its officers to prevent the transmission of diseases such as HIV, despite the existence of NHS guidelines clearly stating that the virus cannot be transmitted through saliva.

Ms Comyn added: “Spit hoods impair police officers’ ability to identify medical conditions and notice distress or pain. Moreover, they are designed to block spit, vomit, blood or other substances escaping them. So, when a wearer discharges a substance into the hood, the breathability of the fabric dramatically drops and the risk of suffocation rises.

“There have been a number of examples of deaths in police custody in circumstances in which spit hoods, or improvised spit hoods, have been used.”

Liberty has also expressed concern at the communities in which such spit hoods are most typically likely to be used.

“Black and ethnic minority communities, which already account for a disproportionate number of deaths after police use of force or restraint, are likely to be disproportionately targeted by spit hoods, risking further damage to the police’s already fraught relations with the communities they serve,” said Ms Comyn.

“The risk that particular groups will be targeted is exacerbated by vague, undisclosed or non-existent sets of police guidance on what can trigger a hooding, leaving open the possibility that police may decide someone poses a ‘threat’ of spitting simply by how they look or where they are from.

"Ultimately, these medieval devices have no place in the future of policing and must be relegated to the past.”

The use of spit hoods by frontline MPS officers had previously been opposed by Commissioner Cressida Dick. However, in a U-turn earlier this month, it was announced they would be issued to officers across the capital. Thirty of the 43 police forces in England and Wales now use spit hoods.

John Apter, chair of the Police Federation of England and Wales responded by asking Liberty to provide an alternative to the use of spit guards, offering a representative from the group the opportunity to attend a training session and to enter into a discussion about its comments, but said he had not yet received a response.

In a letter to the head of Liberty Police Professional reports that he wrote: “Prior to spit guards being issued, a person who was spitting or biting officers would either be put on the ground or restrained with their head forced down. The application of a spit guard uses less force and prevents the act of spiting or biting from continuing.

"Officers will always have to justify their use. Your blanket statement that spit guards must not be used offered no alternative, it would either be use more force or for the officer to allow themselves to be spat at or bitten.

“In your statement you claim that the use of spit guards are dangerous and can be attributed to a number of deaths. The examples you use are from the US where, like Taser, spit guards are used in a very different way.

"The training given to officers ensures the detained persons safety is a priority.

“My offer to Liberty stands; I would urge you to attend a training session where police officers are trained in the use of spit guards. Meet with me to discuss their use and meet officers who have been spat at and had to wait months to put their minds at rest. That is a genuine offer.

“I stand by my support for the full roll out of spit guards to all police officers. This essential piece of equipment protects officers against those vile individuals. Their use is proportionate and safer than any alternative, it protects those who protect the public.

"They deserve this and your flawed and biased opinion gives no credible alternative.”