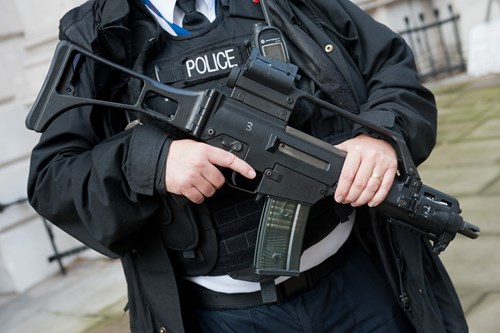 A Government review into whether firearms officers receive adequate protection after firing their weapon on duty has been labelled ‘shambolic.’

Findings from the Firearms Review, which have taken three years to complete, have now been published.

The review concluded that post incident procedures conducted following the 2017 terrorist attacks ‘worked well and were quickly concluded’, that the length of time to investigate cases following a fatality can be stressful, but that significant delay had only been recorded in a ‘small number of cases’.

Time taken to resolve cases has ‘fallen’ the review said and that speeding up investigations is now a key IOPC priority.

However, the PFEW said the review, published on the Home Office’s website amounts to nothing more than ‘325 words plus a link to revised CPS guidelines on the prosecution of police officers’.

Federation Vice Chair Che Donald said the process had been ‘shambolic’ and accused the Home Office of writing the review on the ‘back of a cigarette packet’.

“This was meant to be a meaningful review to allay the very real fears of serving firearms officers around being adequately protected and not treated as suspects just for doing their job,” he said.

“It was announced when the Government was anxious to recruit an extra 1,500 firearms officers after the Paris terror attack and heightened fears in the UK. These fears were then realised with a spate of devastating home-grown attacks in London and Manchester.

“Three years down the line there is still a shortfall of more than 600 firearms officers – and a review that appears to have been written on the back of a cigarette packet.

“Eight months after how long it was taking to be published was challenged at conference we have a shambolic report which doesn’t begin to properly address our concerns.

“It blithely states that ‘the right and legal protections are in place for officers’ and ‘in a great majority of incidents officers were dealt with as witnesses rather than suspects.’ I actually think the Home Office just forgot about the review,” he said.

“That is cold comfort for officers out there doing the job, knowing that if they are forced to pull the trigger their lives will probably be overturned while they are under investigation, often for years.

“Where’s the evidence to show this has been looked into diligently, because it’s certainly not in this review,” he said.

The Home Office also announced its formal approval of the Independent Office for Police Conduct’s (IOPC) section 22 post-incident guidance following a death or serious injury during arrest, in or following custody or after a firearms incident.

“About the only positive thing I can find to say about the whole way this review process has been handled is that it recognises the distress that IOPC investigations and legal processes cause for officers, and it concedes that in a number of cases IOPC investigations take too long,” Che said.

“This review is a sorry and disappointing post-script to a long, flawed and drawn out process.”
Home Secretary Sajid Javid said the review strikes the ‘right balance’ between supporting firearms officers and the need for robust post incident investigations to take place.

“Any use of force by the police must be proportionate and necessary and the public must have confidence that investigations following a police shooting incident are independent and robust,” he said.

“But we must also make sure armed officers feel empowered to use their skills and experience in order to save lives in the most dangerous situations.”