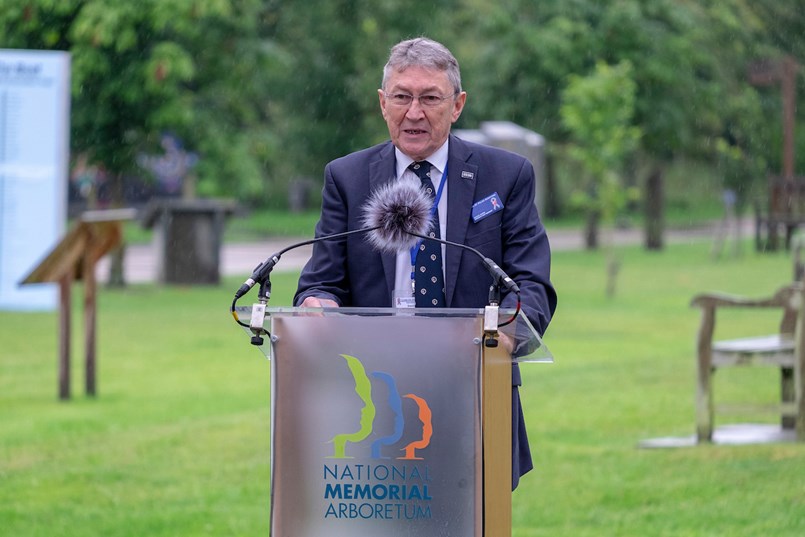 The Police Family gathered on Sunday to remember more than 4,000 police officers who have died on duty - and to support family members left behind.

The Annual Care of Police Survivors Service of Remembrance took place at the National Memorial Arboretum in horrendous weather conditions - but that did not stop the service being packed out.

Denis Gunn, now past-president of the charity (and father of fallen Surrey PC Richard Gunn) said at the service: “As I stand down, I wish Gill, my successor, all the best of luck with a wonderful charity that has helped me enormously over the years as I’ve tried to rebuild my life after losing my son on-duty with Surrey Police.

“This whole weekend, it’s the biggest of several weekends we run throughout the year, this weekend brings all the family members together.

“The whole charity is based on peer support, and it is almost impossible to stress enough how important that is in trying to rebuild your life again after you’ve lost somebody close within the family. Knowing that there are other people who have gone through exactly the same as you have, speaking to these people, it helps enormously.

“This year our motto is, ‘Speak Their Name’. Don’t let them be forgotten. Speak their name.”

The service was attended by more than 800 people and events took place all weekend for surviving family members.

Chief officers from all UK forces, the Home Office and staff associations were among those who took time to honour fallen officers and lay wreaths. The West Midlands Police band and a piper provided accompanying music.

A succession of speakers - known as Survivors (two sons, a sister and a wife) spoke movingly and with good humour recalling their police officer loved one who had been lost on duty and also importantly of the support the Charity COPS offers family members of deceased police officers.

The Blue Knights motorcyclists - long-time supporters of the Charity - were first to arrive at the soggy service on Sunday.

They were shortly followed by more than 400 cyclists from the Annual Police Unity Tour. The bumper event - with riders starting their journeys now from all across Britain - culminated at the Service and is expected to raise some £200,000 for the Charity.

New President of the COPS Charity Gill Marshall said the charity is “so important.”

She added: “The COPS weekend brings together families from all over the country. We can laugh. We can cry. Nobody will judge you and you are amongst people who know every step of the journey that you’ve been on.”