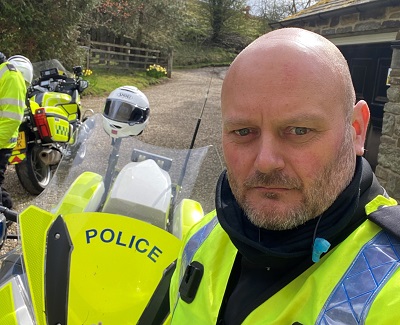 North Yorkshire traffic officer PC Dan Stoppard, who has protected the public for almost two decades, spotlights how the erosion in pay and conditions him and his colleagues have faced, including the removal of special priority payments, makes him feel devalued.

As traffic cops we see fatal road traffic collisions on a regular basis, what is even worse is when it involves children because their life is cut short so soon. I have been rammed when trying to stop a car and I’ve been threatened with knives. You always have that moment afterwards where you think ‘wow, that could have gone a lot worse’.

When people run away from something, police run towards it. My role is to protect life, so I am always running towards that danger to prevent the situation from escalating. I feel devalued by the Government, and I don’t think the danger we face and the scrutiny we are under is reflected fairly in our pay and conditions.

Initially when I joined 18 years ago the cost of living wasn’t really an issue for me, but gradually over the years, and following the Winsor review, I have witnessed and bore the brunt of pay freezes, cuts and drastic changes to pensions and conditions.

The pay structure was also overhauled so some people got put on full PC pay at year seven, whereas I had to wait ten years so there was inequality there. I’m now at the top of the pay scale as a PC but the pay increases simply do not cover rises in the cost of living. I received £1900 this year but my gas and electric bill has shot up to £1500.

Custody sergeants used to get an additional £3500 as a special priority payment and harder to fill roles got an extra £1500. On top of that, if you reached your eleventh year, and, providing you met the criteria, you would receive a competency threshold payment which was £1000. That’s £2500 taken straight off you along with pay freezes and pay cuts over the past decade.

I believe we should be paid not just for our experience, but for our training as well. I am one of the first officers in North Yorkshire to do the First Response Emergency Care (FREC 3) course, which is a bit like a firearms officer’s tactical medicine training. I’m not getting paid any more to be almost a paramedic as well as a traffic officer investigating the scene.