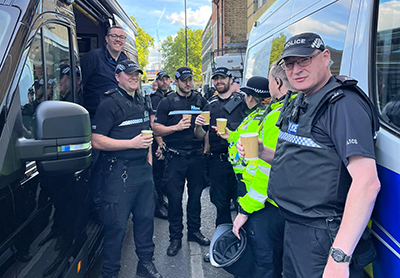 Officers grabbing some much-needed refreshments from one of our welfare vans.

Praise has poured in for police officers from members of the public for their dedication and professionalism in the run up to, and on the day of Her late Majesty Queen Elizabeth II’s state funeral.

More than 10,000 officers were deployed from across England, Wales and Scotland for the biggest security operation the country has ever seen.

“Thank you ALL for your amazing work these last 10 days. To every police service in the UK that attended. Thank you,” one member of the public wrote on Twitter.

“We are very grateful for each day you go to work to protect us! We just don’t say it often enough! Thank you #ThinBlueLine.”

“Well done to the Bearer Party and all the military and police, both the ones seen and behind the scenes. Thank you for your due diligence and professionalism, you did Her Majesty proud,” another pair added.

The support was also felt by police officers on the ground on the day:

“Something that should stick long in our memories, is the reaction to police officers working hard by the general public. Smiles, cheers and applause. There are a minority that detest us, the majority support and believe in us. Remember that. #ThinBlueLine,” Brick Cop commented.

“Unbelievable public support today. Just the passing comments, we had a lady come up to us to say how brilliant the Met had been this week and to thank us all for the hard work. Pointed out that all forces from all over the UK were there and were superb,” a colleague added.

To assist members working long hours, Police Federation of England and Wales reps attended in welfare vans to support officers with refreshments when they were able to have a break.

For officers standing on scene for several hours with nowhere to go, reps were also handing out drinks and snacks down the lines.

“As Crown servants, it has been an absolute honour for police officers to be part of this monumental, historic event as we said goodbye to Her late Majesty Queen Elizabeth II.

“Our police officers have done the UK proud with their professionalism, respect and extraordinary efforts, under challenging circumstances for the whole world to see.

“During this incredibly complex operation officers have worked long hours with minimal rest, at short notice, with many having to navigate plans and manage cancelled rest days and time off. It has been a privilege for them and there have been no complaints, but it is important to mention so we can appreciate how hard they have worked to help this monumental part of history come together.

“We also must not forget that officers who remained in their forces have also had rest days cancelled to ensure coverage and protect the public. We’ve seen exemplary management of crime and disorder in areas outside of London where numbers were lower than usual.

“On Saturday, 16 officers and a police dog were injured in East Leicester as serious disorder broke out. On Friday 16, two officers were stabbed with one potentially suffering life-changing injuries. It is important we recognise the bravery of these officers and offer our full support to aid them towards a full recovery.

“PFEW would like to offer its sincere thanks and gratitude to all police officers - and special constables who have worked hundreds of hours for free - during this unprecedented period,” Ms Lynch concluded.

PFEW Wellbeing Lead Belinda Goodwin said: "The positive impact of just reaching out and offering drinks and snacks to our officers has been immense - it makes them feel wanted and appreciated. We need more of this within our forces, if you give a little back you will have a happier and motivated workforce.

"I was humbled to be a part of this event, and proud of all the outstanding officers who have worked tirelessly on behalf of the public and the Royal Family."