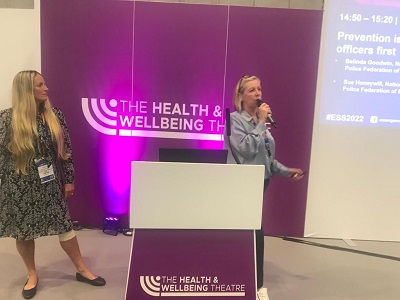 PFEW has called for forces to focus more on proactively supporting their workforce before they reach breaking point.

Federation Wellbeing Leads Belinda Goodwin and Sue Honeywill homed in on the importance of preventative measures at a breakout session on the second day of the Emergency Services Show [22 September] hosted at the NEC in Birmingham.

PFEW believes forces should monitor the number of traumatic incidents individual officers have attended to make informed operational decisions on where to deploy them.

“Officer numbers are vital. It really helps if you have got your colleagues to bounce off and debrief after going to a horrific job, but it doesn’t happen often enough. We must have a better understanding of what officers are going to on a shift,” explained Sue.

“You could go to a horrendous sudden death, and then on the same day you might go to a suicide and then you might attend a fatal road traffic accident - that’s three traumatic jobs in a short space of time. That officer is going to finish that shift may feel emotionally broken.”

A Police Traumatic Event Checklist is currently being developed by PFEW and Police Care UK, in conjunction with Cambridge University.

More than 1500 officers and staff's worst reported incidents on the job were coded to create a system to identify and manage trauma.

Currently, however, there is no gold standard by which trauma exposure is measured in UK policing.

“We are continually exposed to trauma on a day-to-day basis, as are the other blue light services,” Belinda added. “During covid we saw some officers attending 15 sudden deaths in one shift. Where does that trauma go and who is monitoring that?”

Both stressed the importance of having support from a supervisor, with casual chats to check in on how officers are feeling and meaningful performance development reviews which tie in mental health and wellbeing.

“I have been listening to members and some have told me they don’t see their supervisors for two or even three months. That is shocking,” commented Belinda.

“Prevention intervention is so important. When an officer is getting stressed, supervisors shouldn’t be frightened to sit down and have a one-to-one to ask if they are ok,” Sue added.

Provisions have improved across forces and there is some positive work taking place around mental health and wellbeing, they acknowledged, citing all forces currently have telephone counselling in place, however there is no consistency across the 43 forces with some officers receiving better care than others.

“Officer care and welfare is the responsibility of forces, but what we have found is that there are gaps in the service in terms of mental health support, so what we have done as a Federation is invest in the Welfare Support Programme,” continued Belinda.

Hundreds of members have been provided with life-changing mental health support from specialists funded by the Police Federation.

Our Welfare Support Programme (WSP) is continuing to offer a wide range of confidential and independent services from clinical assessments, to counselling with fully trained and accredited professionals.

“We have got to protect our officers with the right equipment, good PPE so they are well equipped to deal with violent situations, all the way through to supporting their mental health and wellbeing,” concluded Sue.