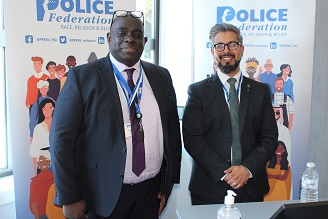 The seminar was opened by Race, Religion and Belief group Chair Paul Odle, who co-organised the two-day event alongside Equality Lead Ian Sanders and National Board member Zac Mader.

He highlighted the ‘tremendous progress’ which has already been made by the PFEW group alongside stakeholders including HMICFRS, IOPC and NPCC, before introducing our Vice-Chair.

Mr Donald said: “We all know that policing is firmly under the spotlight for a variety of issues, and that’s not going away. It’s absolutely vital we talk about subjects like this.

“Policing culture isn’t going to go away. How do we change it and how do we challenge it? Whose responsibility is it - does it start at the top, or at the bottom, or is it collective?

“In fact, we all have a part to play. We have to have the machinery and processes in place to allow people to have the moral courage to step forward and challenge. Chris Excell from the Metropolitan Police’s Black Police Association put it well by saying that if the support mechanism isn’t there for people to step forward, and you can’t feel confident in the processes and policies that are there for you - you are effectively ostracised.

“The fact is everyone in policing has a responsibility from the bottom to the top, to deal with issues around race, religion and belief.” 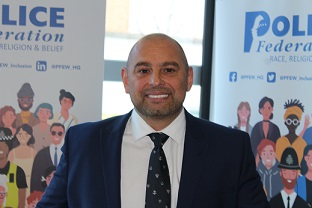 IOPC Discrimination Lead Sal Naseem said it was ‘a real privilege to come and speak to delegates,’ and told the seminar he was motivated to ensure that demonstrable action was taken against many of the difficult issues blighting policing.

He described the IOPC’s focus on racial discrimination and described how the organisation was examining the lack of trust and confidence amongst black, Asian and minority ethnic communities in policing. Mr Naseem also discussed how contentious issues related directly to police officers from those communities, and then spoke about his own personal experience of diversity and inclusion growing up in a Scottish town.

On the topic of workplace ‘banter,’ he told how the inappropriate use of messaging apps amongst colleagues ‘reverberated in the media and served to confirm the worst fears of those communities and groups which are currently feeling the most distanced from policing’.

He also recounted how the IOPC had written to the NPCC last April to express concerns about the use of social media, and to remind forces and officers of their obligation under the code of ethics and standards of professional behaviour.

The Discrimination Lead, who is also the IOPC’s Regional Director for London, explained his personal motivation for taking on the difficult role alongside his ‘day’ responsibilities involving the Met and City of London forces, and British Transport Police.

He said: “Why do I do it? Because I'm a south Asian male who's come through a lot of open racism and dealt with some difficult stuff growing up. So, I've got a seat at the table.

“What do I do when I've got a seat at the table? I want to try my best to try and drive change through the organisation that I work with.”