Police and crime commissioners (PCCs) across England and Wales have backed PFEW’s joint campaign for emergency workers killed in the line of duty to be posthumously awarded. 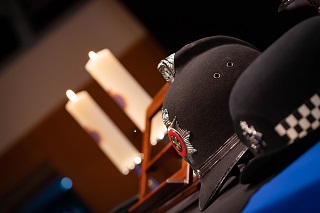 Last week a majority of PCCs wrote a letter to the new Home Secretary Suella Braverman asking her to consider the creation of the award to ensure officers are “honoured and remembered appropriately with the dignity they duly deserve”.

The Police Federation of England and Wales (PFEW) is continuing to press the Government to create a new award which honours fallen emergency service workers who make the ultimate sacrifice while in the execution of their duty.

The campaign officially launched by PFEW, the Police Superintendents’ Association and the Prison Officers’ Association in April is gaining momentum and has so far received cross-party support as well as the backing of the Scottish Government.

Together they are lobbying for Home Office approval and are seeking cross-party support to enhance the current honours and awards system, which fails to adequately reflect the dedication, commitment and sacrifice of those individuals who lost their lives in keeping their local communities safe.

The campaign has also been spearheaded by Bryn Hughes, whose daughter PC Nicola Hughes and her colleague PC Fiona Bone were murdered 10 years ago, and the families of fallen officers across the United Kingdom.

PFEW National Board Member John Partington, commented: “The Police Federation of England and Wales continues to work alongside Bryn Hughes and other families in their call for a posthumous award for those who die in the execution of their duty.

“I repeat my call to the Home Secretary to resolve this matter with urgency so the families of all emergency service workers who have lost their lives while serving their communities can count on the state recognition they deserve.”